My earliest memory of being courageous is that of my overcoming fear of diving off a high diving board in a swimming pool. I learnt to swim in this very pool shown above in Chennai. I would have been all of eleven years old then. After having learnt to swim, the next step was to learn how to dive. First from the sides of the pool and then from the lower boards of the diving board and then came the most scary of them all the high board.

I can assure you that it was almost like Mr. Bean’s experience when I first went up the steps and saw the water below for the first time. It took a great deal of courage to overcome the fear and take that plunge which I eventually managed to. The next one and the next ones were pieces of cake.

The next challenge came when I went to a swimming pool with a higher diving board. 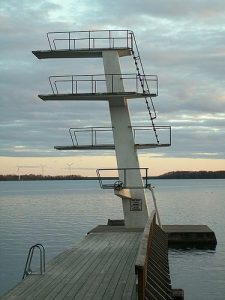 It was Mr. Bean time all over again but eventually I did overcome the fear and dived and need I say, history repeated itself after that.

Here I pause to share with my readers one exception to my observation.  In our North Eastern States, travel between two towns is usually by shared taxis and the favourite vehicle in those days used as taxis was Jonga. These were usually driven by daredevils who wanted to take on the likes of Sterling Moss of those days. Their speciality was in taking mountain bends and hairpin bends at speeds in excess of 60 KPH much to the discomfort of passengers like me. The locals were quite accustomed to such death defying driving but, I had to endure it during my travelling days there and I had to use them always with a prayer in my lips. I am convinced that if I am here to write this post, it is God’s grace and my good karmas.

There have also been foolish decisions that eventually proved that the experience should not be repeated but, the first one had to be taken as an act of courage.

My conclusion is that the first time you have to be courageous is the tough one. The same experiences to be repeated are not acts of courage but routine.

This is my take on this week’s Friday 5 On 1 blog post topic. The other four bloggers who write on the same topic every Friday are Sanjana, Padmum and Shackman and Conrad.   Conrad incidentally, is the original founder of the weekly bloggers group formed way back in 2009. This week’s topic was suggested by Shackman. Please do go over to their respective blogs to see what they have to say on the topic. Thank you.