Grannymar‘s Sunday oneliner this week is: “Don’t cry because it’s over, smile because it happened.”
~ Dr. Seuss.

Yesterday, my sister Padmini published a photograph from her collection on her Facebook wall. This is my late wife Urmeela with our son Ranjan during our halcyon days. I did not even know that this photograph existed and do not remember when this was taken and by who. It did however affect me enough to make me a bit melancholy till I came across another photograph taken more recently. 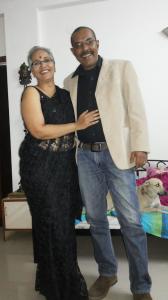 This is my daughter in law Manjiree with my son Ranjan taken just a few months ago.

We tend to forget that happiness doesn’t come as a result of getting something we don’t have, but rather of recognising & appreciating what we DO HAVE. The attraction? Denzel Washington. The reason for going on a Weekend afternoon, a busy calendar the whole of next week for both my partner in crime Ramesh and me. And despite the higher cost of the tickets, both of us also wanted to exploit a sale offering “buy two get one free” from a shop that we patronise for garments in the mall that houses the multiplex. The offer is only for this weekend.

The reaction? Overall, a very satisfying afternoon. The film was good, I made some new friends at the theater and at the shop after the movie and Denzel did not disappoint.  Both Ramesh and I made some good purchases as well.

The story builds up nicely with just enough mystery to keep the viewer’s curiosity about the background of the hero alive till it all falls into place.  The action is fast paced and quite realistic considering the background of the hero and tight direction and editing makes it a worthwhile movie to watch.  Definitely a better film than just a popcorn movie.  I however hesitate to give it a full six star because of the length of the film.  It could have been lower with some unnecessary scenes cut out.  So, Denzel has to be satisfied with [rating=5].

I was married to a fairly accomplished artist Urmeela but as much as I tried I could never learn the nuances of art appreciation of any kind. Even in music, I either like or dislike something but if I was asked as to why, I would not be able to answer. People found it strange as Urmeela could paint, play the piano, the guitar, the tabla and was creative in many ways. I would simply say that I married the artist not the art and leave it at that.

So, this topic is a bit of a problem for me as how does one with such limited ability write on it? I have therefore decided to just share a video of a piece of music which apparently was a major hit though I simply could not see why it was so. I leave it to me readers to decide whether my assessment that this artist and the music are highly overrated or not.

This topic was suggested by Shackman for the weekly Friday Loose Bloggers Consortium (LBC) where currently six of us write on the same topic every Friday. I hope that you have enjoyed my contribution to that effort.  The five other bloggers who write regularly are, in alphabetical order,  Ashok, gaelikaa, Maxi, and Shackman and The Old Fossil. Do drop in on their blogs and see what their take is on this week’s topic. Since some of them may post late, or not at all this week, do give some allowance for that too! 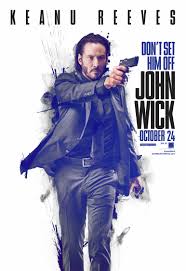 What a movie! Phew!

My readers will find it difficult to believe it but I went to see it so that I can write a blog post. Someone very dear to me texted me earlier this morning as to why I have not been blogging.  I responded that my brain had gone to sleep but I thought to myself that I should get back to blogging and might as well do it with a review of a movie.

That there was a movie running with Keanu Reeves starring in it made it even more attractive a proposition.  And with two of my friends agreeing to spend a few hours with some male bonding, we went for a matinee show and winded down with some great high tea in great ambience.

This movie is what my friend Chuck calls a Pop Corn Movie.  A very weak story made to come alive with nothing but clever photography and mindless violence, nowadays called as action.  One expects the hero to win against all odds and he does but does it while keeping the viewer’s eyes pealed and his bottom glued to the seat.  If you can afford to have your adrenalin pumping non stop for about a hundred minutes, this movie is worth a dekho.  In fact that the excitement lasts only for about that much is a great plus point which pushes my rating for it from three to [rating=4].

I love people who are like Mimi and I simply like to be Eunice in the strip above. The lower other people’s expectations of me, the happier I am as I am not quite the meet very high expectations type. The one single person who had expectations of me, my late mother, had just ordinary expectations and so it was relatively easy for me to come up to them. That in some cases, due to sheer luck or as others point out, being in the right place at the right time with the right credentials, I surpassed her expectations and it was a joy for her worth beholding.  On the other hand, I never had to let her down as she did not expect too much!

I have seen a lot of others with high expectations of themselves, their spouses and / or their children and having seen what happens to them, I would rather not have any at all. That way there are no disappointments and recriminations.

My readers will naturally ask if I don’t have expectations of myself. In all honesty, I can say that I don’t other than the one simple expectation that all of us have; to go when the time comes without pain and suffering. I do not have great expectations of anyone else in my life either and that makes it very simple for a peaceful and relatively stress free life.

This topic was suggested by me for the weekly Friday Loose Bloggers Consortium (LBC) where currently six of us write on the same topic every Friday. I hope that you enjoy my contribution to that effort.  The five other bloggers who write regularly are, in alphabetical order,  Ashok, gaelikaa, Maxi, and Shackman and The Old Fossil. Do drop in on their blogs and see what their take is on this week’s topic. Since some of them may post late, or not at all this week, do give some allowance for that too!