My children Manjiree and Ranjan insisted that I see Lion, and I am glad that they did. I would have gladly given it a miss had I depended on just the kind of publicity that it has received here. In fact, till I sat down to write this post, I did not even know that this film is a multiple award nominee and winner. I had vaguely heard that Dev Patel got some award for his performance in this film but other than that, I was totally ignorant.

Briefly, this is a real life story of a five year old boy from the heartland of India who gets lost, is sheltered in a foster home and eventually gets adopted by an Australian couple. He eventually returns as an adult after going through a traumatic life of memories, to find that his mother has never given up on him.

The story does everything possible to pluck at your emotional strings. Joy, amusement, anger, pity, frustration and so on and I must complement the director who has been able to do so successfully in his debut film. The child actors perform so well that they overshadow Dev Patel and Nicole Kidman. The very effective music score at the background soothes and excites by turns and the overall effect is a pleasant experience, somewhat like a roller coaster ride that ends well.

If ever there was a movie that strengthened my belief in the theory of Karma, this is it. Many questions like why the young lad gets separated, and unlike more than hundreds of thousands of young children who go missing every year in India, why he gets adopted by an Australian couple, why the other child adopted by the same couple becomes a disappointment etc, can be answered only with the logic of Karma.

If you can, you must see it.

Incidentally, this is the third Indian film that has featured Australia that I have enjoyed seeing. I have written about UnIndian but not about Bhag Milka Bhag, a song from which keeps bugging me as an earworm on and off. Let me share that  song with you. 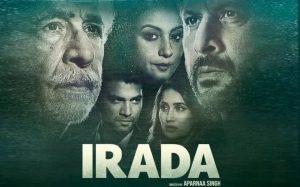 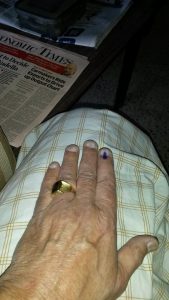 Elections to various local bodies were held yesterday in many parts of our state.

Like I inevitably do, I voted too and here is proof!

To those who are unfamiliar, in India, people returning to vote more than once can happen and has happened in the past and so, a preventive measure is to apply an indelible ink mark on the left forefinger of the voter just before s/he enters the booth to register the vote.

Indians however are famous for their jugaad. A very innovative solution has been found to overcome the problem of the ink mark by this simple device! 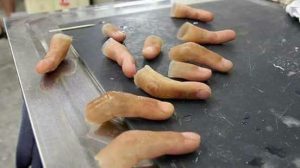 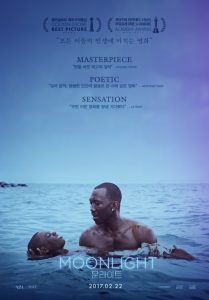