To add to that very pithy observation, it is still not going as planned and that is okay too.

On getting an alert from Cheerful Monk, I too decided to shift my ‘advice by email of posts’ from Feedburner to MailChimp.

Thanks to a resident geek in the form of my son Ranjan’s help, I was able to accomplish this last night. Those of my readers who have opted to get advice by email of my posts will get advice of this post and all future posts via MailChimp.

I request my readers to please go back a few posts on this blog to assure themselves that they have not missed any of my earlier posts due to a glitch in Feedburner.

It is odd that this topic has come about when I am still mulling over the effects of The Danger Of A Single Story. Another instance of synchronicity! And I am mulling over this topic primarily because the recently held elections in some states of India has thrown up results that are being interpreted in so many ways and I am in separate discussions with three people on three different perceptions about the causes and likely effects of the outcome.

Blind Men and the Elephant

It was six men of Indostan,
To learning much inclined,
Who went to see the Elephant
(Though all of them were blind),
That each by observation
Might satisfy his mind.

The First approach’d the Elephant,
And happening to fall
Against his broad and sturdy side,
At once began to bawl:
“God bless me! but the Elephant
Is very like a wall!”

The Second, feeling of the tusk,
Cried, -“Ho! what have we here
So very round and smooth and sharp?
To me ’tis mighty clear,
This wonder of an Elephant
Is very like a spear!”

The Third approach’d the animal,
And happening to take
The squirming trunk within his hands,
Thus boldly up and spake:
“I see,” -quoth he- “the Elephant
Is very like a snake!”

The Fourth reached out an eager hand,
And felt about the knee:
“What most this wondrous beast is like
Is mighty plain,” -quoth he,-
“‘Tis clear enough the Elephant
Is very like a tree!”

The Fifth, who chanced to touch the ear,
Said- “E’en the blindest man
Can tell what this resembles most;
Deny the fact who can,
This marvel of an Elephant
Is very like a fan!”

The Sixth no sooner had begun
About the beast to grope,
Then, seizing on the swinging tail
That fell within his scope,
“I see,” -quoth he,- “the Elephant
Is very like a rope!”

And so these men of Indostan
Disputed loud and long,
Each in his own opinion
Exceeding stiff and strong,
Though each was partly in the right,
And all were in the wrong!

So, oft in theologic wars
The disputants, I ween,
Rail on in utter ignorance
Of what each other mean;
And prate about an Elephant
Not one of them has seen!

The inspiration for this poem was the Panchatantra as can readily be seen from the beginning verse where the six blind men are said to be from Indosthan, an Anglicised word for Hindustan.

Pravin has suggested the topic for this week’s LBC Friday post. You can see what the other writers of the LBC have to say in their respective blogs.  Maria, Pravin and Shackman. 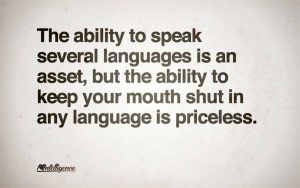 No, I did not have to use a pencil to correspond with my pen pal. I had only one ever and he came about because of the United States Information Service’s library in Madras in the 1950s. My cousin was a librarian there and she had made me and my siblings members. We used to borrow books from there. One day, she asked me if I would like to be a pen pal to an American of my age, which at that time was 13 and I said sure and so I became friends with a young lad from the USA named Johny Horrigan Jr. We exchanged a few letters, and both of us got bored of it and so the pen pal activity tapered off to an unceremonious end.

Fast forward to the 21st Century and I have made a great many online/blogger pals who I suppose are the modern equivalent of pen pals. We use computers and the internet instead of paper, pen and the postal services. The process is much faster too.

Like all pen pals do, I too hope that I will get to meet some of my online pals as they assure me they do too. Without personally meeting however, I have been able to establish many good long distance friendships thanks to the internet and blogging and I am grateful for the opportunity.

Shackman has suggested the topic for this week’s LBC Friday post. You can see what the other writers of the LBC have to say in their respective blogs.  Maria, Pravin and Shackman.