Let me start off by defining the term Oxymoron.

An oxymoron is a figure of speech where two words of opposed or contradictory meaning are used together to create emphasis. While some oxymorons are created by accident – such as “small crowd” – sometimes they are used deliberately to draw attention to something or to create drama for the reader or listener.

My first choice will be:

The next one would be:

Clearly misunderstood. Means that the recipient of the message has not understood the message at all.  The first word would indicate clarity and the second misunderstanding. How can one misunderstand something that is clear?  The inanity of the combination fascinates me.

The next one would be:

Friendly take-over. This is a business operation where one company takes over the control and management of the other.  The first word would mean amity and the second a grabbing of another’s property.  While in practice what this means is that the majority shareholders have agreed to sell their stake at an agreed to price, the minority and the employees and other stake holders can whistle at the change.  I have not come across any instance of it internally being a friendly move for the taken over and that  is why it fascinates me.

The next would be:

Jumbo shrimp.  A large sized shrimp.  Jumbo would indicated an elephantine size and shrimp in popular usage is for something tiny.  The combination is ridiculous for its usage as the correct name could well be Giant Prawn which is in someways another oxymoron!

The next and most intriguing would be:

Living dead. Does this really need an explanation?  I am yet to meet a living dead entity but keep reading about such people.  It simply does not make any sense whatsoever to use this oxymoron for its sheer stupidity.

Please go over to Shackman’s blog to see what he has to say about this fascinating topic. 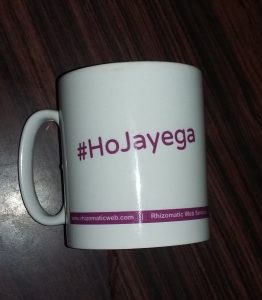 This is the mug from which I now drink my morning and afternoon tea. Ho Jayega in Hindi means It Will Happen.

Yesterday evening I heard my son Ranjan singing something that sounded like arewah punma punma punma. I couldn’t decipher the words but the tune was familiar. So I went searching for the tune and found it on Youtube.

Way back in 1978 my sister in law visiting from Nigeria had brought a long playing record by a totally unknown to us, band called Osibisa. One song in it was Ojayeoja. In that song, there is a phrase that goes aloma kuluva kuluva kuluva or, something like that. Not knowing the language we used to hum along with the tune.

Some time later I asked Ranjan what made him come up with that tune and he said that he found the word phunuwa used by some people funny and so used the word in the tune. Phunuwa being a dialect of Hindi for phone – cell phone that is.

So, Ho Jayega, and phunuwa put together took me to this song.  A very catchy tune that had the effect of becoming an ear worm often.

Ursula the incredible has this to say in her blog post Evolution And Chair.

Ramana is not one who will back off from a challenge like that.

No, he will most certainly not ask Ursula to stand on her head. That advice is reserved for some other incredible people even without their ever asking him.

Instead, Ramana’s most sensible advice to Ursula is simply this. 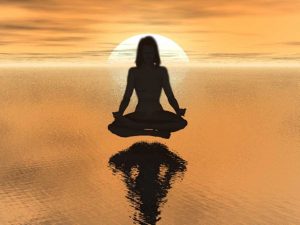