For years, I used to use Hydrogen Peroxide drops and buds to clean my ears till an ENT specialist who I accidentally met on a plane trip told me that I should not. He suggested just the bud and if at all necessary to an ENT specialist. I have heeded his advice till date and have not had to go to any specialist for a cleaning session.

My cousin Shankar who has been to China and is fascinated by that country sent me a story about the ear cleaners of Chengdu and asked me rather plaintively “I wonder if this custom exist in some parts of India?”  This does not exist in that part of the country where he lives but, I am surprised that he did not see this in the other parts that he has visited.

He asked the right person!

I promptly sent this link to him.

I would not dare opt for this service.  Would you? 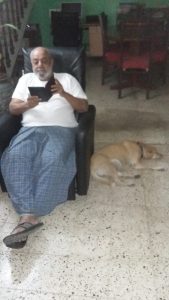 This is a photograph of me reading my kindle while Chutki blissfully is asleep on the floor next to me.

When my son and daughter in love are not at home, this is how she keeps an eye on me.  Chutki normally sleeps with them upstairs or on one of the sofa chairs in the drawing room but, when I am alone at home she will be as near to me as possible. If not on the floor like this, she will be on the divan just in front of the recliner chair on the left unfortunately not shown here.

Even when I am on my bed in the bedroom, she will sleep below the bed and every now and then come and poke her wet nose into my out flung hand to see if I move.

An animal behaviourist who had come home to visit some time ago said that this behaviour is because she believes that I am her pup and she just wants to ensure that I am okay!

Whether that is true or not, she is my companion when I am all alone at home.

I am blessed or what? Some beautiful answers and way of thinking of Turkish poet Jalaluddin Rumi….

What Is Poison ? ? ?
AnyThing Which Is More Than Our Necessity Is Poison. It May Be Power, Wealth, Hunger, Ego, Greed, Laziness, Love, Ambition, Hate, Or AnyThing.

What Is Fear ? ? ?
Non Acceptance Of Uncertainty. If We Accept That Uncertainty, It Becomes Adventure.

What Is Envy ? ? ?
Non Acceptance Of Good In Others. If We Accept That Good, It Becomes Inspiration.

What Is Anger ? ? ?
Non Acceptance Of Things Which Are Beyond Our Control. If We Accept, It Becomes Tolerance.

What Is Hatred ? ? ?
Non Acceptance Of Person As He Is. If We Accept A Person Unconditionally, It Becomes Love.

I was busy attending to my email etc on the computer when my daughter in love said: “Appadum, would you like to see what your DIL is doing? Just what the MIL of this home used to do?”

So, I got myself moving to the garden to see what she was up to and this is what I saw.  The other lady assisting her in the very noble activity is our help Mangal who features in some of my posts regularly. Not quite the kind of painting the elder Mrs. Rajgopaul used to indulge in but, painting nevertheless!

I thought to myself that the former will be spinning like a top wherever she is.