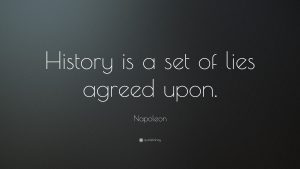 All history is to some degree subjective, written by individuals who are above all people of their own time.

I am a kind of history buff and like to read as much as possible about our history which is now being rewritten from an Indian point of view rather than from a colonial / racist point of view. And as I write this, history is being made in India by renaming some places to remove Islamic names given by invaders to the original Indian names. Some kind of course correction as it were.

Similarly, there are stories of valiant women which have been kept hidden for centuries which are now being brought out in the open and using social media, spread among Indians so that they can be proud of their heritage. Here is one such about which no history text book ever wrote to my knowledge.

I am also currently reading an amazing book “The Educational Heritage Of Ancient India; How An Ecosystem Of Learning Was Laid To Waste” by Sahana Singh.  There are some more books on Indian history waiting to be read, all promising to be very stimulating.

In short, I was rather surprised at the serendipity of the topic for today’s post being suggested by Shackman for our weekly 2 on 1 posts and I have shared my reason for the surprise.  Please do go over to Shackman’s blog to see what he has to say about the same topic. 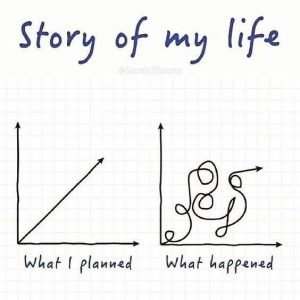 I went to a movie after three months! Not because I had better things to do but, nothing new came up that interested me. Andhadhun however has received rave reviews and a very dear friend who saw it wrote specially to me to go and see it. So, I was escorted by R and M in style yesterday and had a grand evening out. Even the traffic God was kind and we reached the venue fifteen minutes ahead of time and had to wait for the auditorium to be cleaned after the previous screening before we could go in. And the good fortune continued on the way back too and even the traffic lights were in our favour.

It is rare indeed to see a Bollywood movie in the Black Comedy genre and this one is among the blackest. There are occasions when it becomes difficult to believe that it is a comedy after all but, over all the blackness is very present and exciting. Every moment of the 2 hours and 20 minutes of the running time was well spent. Says something about the excellent editing and direction.

That the movie was made in Pune and many scenes are from places that I am familiar with, was icing on the cake..

Very much worth seeing and I give it a five star rating. Please do not miss it if you can possibly get to see it on the big screen. I know many people who read their daily horoscopes in the newspapers as well as the weekly ones in the end of the week issues as well as magazines. I also know many people who consult professional astrologers for just about everything in life. In India, astrologers play a very important role in finding or rejecting suitable marriage matches based on the compatibility of both horoscopes.  I personally did not when I got married and had a very fruitful and joyful married life for 40 years.  I sometimes wonder what would have happened had I consulted an astrologer before I got married!

I personally do not believe in horoscopes and do not ever read the columns in the press. I think that it is a lot of hocus-pocus. I know professional content writers who write for horoscope columns who haven’t a clue about astrology but, who are wordsmiths who can write drivel like the following three insertions for Cancer, my sun sign, in three different newspapers last Sunday.

1. Health shall improve, wear more of orange and yellow to retain your health and energy levels this week. You might also be compelled to behave in such a way as you shall see people doing and saying outrageous things, even though it might hurt them in the long run. My advise to you is to just hear what you want to hear and see things as a casual observation. You might even wake up to realise how pathetic the modern material life is. But God has blessed you with super intuition to guide you in times of crisis and you need to trust yourself through in spirt of how things might appear at any time. Sometimes you need to be a bit selfish and think of your interests and concerns first. Wear reds, pinks and maroons to improve your professional prospects.

2. This is an excellent moment for business transactions and negotiations. You are disciplined and your critical faculties are sharp. You are open to divergent views. Ego drives are high and you attract arguments and altercations but, you manage to get your way in the end.

3. It is a useful moment for all ambitious crabs and if you are pursuing a professional goal, or increased status in your community, go for it. Maternal type relations are seen to be the most significant, and it looks as if you could benefit from people who come forward to protect you.

Can any of my readers make any sense of any of the drivel that the three have dished out for me? I could not.  That is why I would rather call it HORRORSCOPE.

I had suggested this topic as a lark for our weekly Friday 2 on 1 posts. Please go along to Shackman’s blog to see what he has to say on the same topic.