A well wisher who, I am sure, would rather not be publicly acknowledged, sent me a link to a remarkable article on writing. I am sending that link in this post to my readers most of whom are writers of blogs too.

The main take away for writers from the article, which are part of the article are:

i. Never use a metaphor, simile or other figure of speech which you are used to seeing in print.

ii. Never use a long word where a short one will do.

iii. If it is possible to cut a word out, always cut it out.

iv. Never use the passive where you can use the active.

v. Never use a foreign phrase, a scientific word or a jargon word if you can think of an everyday English equivalent.

vi. Break any of these rules sooner than say anything outright barbarous.

My sincere gratitude to the well wisher.

KAKVI is a dark, thick liquid extracted during the process of refining sugar cane into table sugar. KAKVI is obtained during the third boiling of the cane syrup and contains a unique concentration of many important vitamins and minerals left over after the sugar’s sucrose is crystallized. I use this instead of sugar.

I ordered two bottles of kakvi online after visiting this page.

I received a carton weighing about three kilograms containing two tiny bottles. Most of the carton contained bubble wraps and some cardboard fillers. Agreed that the glass bottles needed to be protected so that they don’t break in transit but, this, in my opinion is over kill. 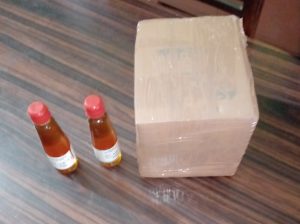 As it so often happens, two messages on my WhatsApp today leads me to this blog post.

The first message that I received in a group page was this image from a very savvy old colleague who has overcome some big problems and is now perceived to be a success.  Please click on the image to get a larger resolution. The next one was from another young friend, in his early fifties now employed in Europe in the Financial Sector, with a perceived successful career behind him with more to come in the future. After we exchanged some other information, he came up with the following:

“Been working since 6.30 am. Annual results expected by mid February, with possible layoffs to follow. Hope I get made redundant with a good severance package! Will be happy.

If it happens, would like to use the time to retrain myself to do something more enjoyable and less stressful. Unfortunately, I got a very good rating at my appraisal a few weeks ago, so unlikely.

“Will also tell you someday about how selfish and self obsessed most people in the financial services industry are. Pays well but kills the soul.

I hope that you noticed that he thinks that it is unfortunate that he got a good performance appraisal rating!  Had he been a Millennial, I would have directed him to my blog post written some months ago so that he could identify with the millennials! Since he is not, I shall wait till post results of his employers to come up with another discussion with him.

He was in Pune in December and January and I could sense that he was not very happy with what he was doing but, I did not comment on it except to joke about it calling it his mid life crisis. At that point, I had gone back in my own life and recalled that I had just finished on five year contract with an employer and had retired two years later than I had aspired to. I did not look to be retrained but was enjoying my retired life after many years of travelling and not spending enough time with the family, spending time with my late wife and friends and generally goofing off. A series of events led me back into corporate life again on three separate occasions.

I hope that some such unplanned for “events” will take place in my friend’s life as well and when he is back in India by the end of this year, I will have more interesting topics to talk with him about.

Incidentally, I have consulted some friends to figure out a graphic to describe an iceberg of failures. Once that is ready, I shall post another blog about it.

Just a two minutes long video with a powerful message from the mouth of a child. Please also read the comments offered up by his parents on Youtube.