This is a message in Tamil.

On reflection, I flatter myself that mine is  mostly like the winnowing basket.  I have trained myself to be like that and to the best of my recollection, I don’t retain the negativity that comes my way, thanks to modern communication methods.

There are however impressions left in the mind from when my mind had been like the sieve which are difficult to remove, due to the impact that they had on me when they were formed.  I am working on them. I am at peace with myself and the world that I live in.

I am well past the proverbial Three Score And Ten and I strongly believe that I should not reinvent the wheel when someone more capable than I has already done that.  Buddha therefore is the blogger here for the topic. This is my take on this week’s Friday 3 On 1 blog posts where Sanjana, Shackman and I write on the same topic. Today’s topic has been suggested by Sanjana. Please do go over to the other two blogs to see what they have to say on the same topic. Thank you.

As I write this, it is pouring outside. The tail end effect of our Cyclone Tauktae.. Unlike our other months of May, this one has been relatively cool thanks to regular rains and now this. Thankfully, we are well inshore but, our West Coast has been devastated.

That is not why I chose the topic though! That is due to some very special treats that I had and am about to have later in the evening.

The first one. My daughter in love decided to give me a special treat today and so last night, while I was in my bedroom reading, she cooked up one of my all time favourites which used to be a regular feature in my late mother’s and her elder sister’s kitchens. This is called Palada Payasam and is made with rice pasta in tape form. During my mother’s times, it used to be made at home but, now ready made ones are available and that is what was used by my DIL for this delicious dish.

Not to be left with just this one favourite dish the irrepressible DIL had also arranged to make Thalipeeth, another favourite of mine and to go along with it Cucumber Raita. The little dash of red stuff that you see on the top right side of the plate is green mango chutney made at the home of a friend of ours here.
So, I had a grand lunch and while still in the process was interrupted by a courier with a parcel. That parcel turned out to be: This is a cake that the DIL had ordered from a neighbour who bakes at home and sells to customers in the neighbourhood.

This is the special treat that I intend having later in the evening when the DIL returns home.

So, there I was feeling quite pleased with my Sunday which had started off badly with three newspapers not being delivered due to some breakdown in logistics, when my son and heir decided to treat me to another magnificent gift. 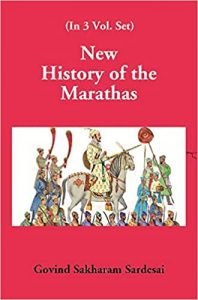 I had been on the lookout for this set of three volumes for quite some time as these have been out of print and not available anywhere. These were found with one online seller who not only had stock but also was offering them on a sale at reduced prices.

Yes, it poured metaphorically and in reality today. And the joy is yet unfulfilled as I write this, as I am still to dig into that delicious looking cake.

As it so often happens to me, synchronicity struck again.

I received this little gem on my WhatsApp screen from a dear friend ST, who does not read my blog posts. 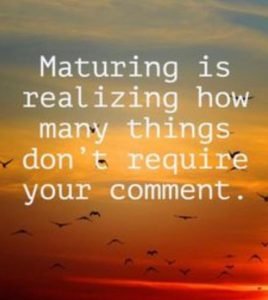 I could not resist the temptation to send ST a link to my yesterday’s post on Maturity and asked him “Since I have commented, am I immature?”

He is still mulling over his response to me. I doubt very much that he will but, if he does, it will give me an opportunity for another post!

When I was in school, one refrain from my parents and teachers was “Act your age”. Sometimes, it was because I acted in a manner befitting one younger and in others one older. In the latter case, another adage used to be common “You are old beyond your age”.

These reflections are what prompted me to suggest this topic when I was reminiscing about my teenage years for a different purpose.

I distinctly remember one particular instance when a prospect that I was trying to convince to buy a policy from me told me, “You are not mature enough to understand my problem. Please get your Supervisor to come over to discuss this matter.” I promptly did that and found that the Supervisor said the same things that I had said but, the prospect accepted those arguments which he had not from me. A matter of perception and lack of confidence in a young person. At least he was being direct instead of some others who were patronising which was worse.

I grew out of all these stages eventually and I had to assume leadership roles soon enough when the impact of being mature really hit me hard. I understood then that maturity comes with experience and not age. This was when I came across a definition of “maturity” as acting with courage but, with concern” which resonated with me and I have used that as a yardstick to assess my own and others level of maturity.

Here is a case in point to drive home my point. My post yesterday talked about a physically mature and so called educated person. Some would say that he even acted with courage of some sorts but, surely, he did not act with concern, for himself and for the rest of the society. I most decidedly would not call him mature. Would you?

During the lockdown, many activities have been suspended for the good of the general public. There are however some stupid people who think that they can beat the system and do things that they should not be doing in the interest of safety.

One such character recently sent me a message on WhatsApp boasting about going for a jaunt with some friends after very careful planning. I quote him.

“We left home at five in the morning, to take advantage of the police nakabandi*  shift change timings to avoid harassment, and reached xxxxxx by around 6 o’clock, loafed around and were back at home at 8 O’clock refreshed and ready to take on the world.”

If he thought that he would impress me, he was in for a rude shock. I responded with: It is for such people that someone has come up with a new word which is the title for this post.

* A Police barricade at strategic points to check vehicles and people from going about for non essential purposes.