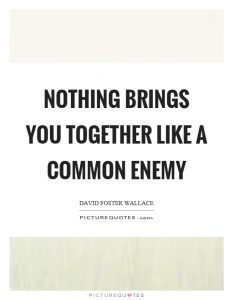 “The other” has been the bane of human beings from time immemorial and there does not seem to be any end to it, not at least in my life time.

Let us take the most common today.  Islamophobia.  A conference of some Heads of Islamic States was recently held to address this issue. This is a global phenomenon and locally in India, I have recently been reading some very explosive material on the alienation that the Muslims in India feel. The first one is this book from a young mother and the other is from two very knowledgeable and erudite Muslims of India.

All the three links given above will give my readers some idea about the problems faced by the Islamic world in general and the Muslims of India. I am particularly concerned about the latter as it can have serious repercussions in the next few years with Right Wing nationalism growing in India, Pakistan imploding and Bangladesh in an economic crisis. If the problems faced by the two countries result in a refugee problem in India, there will be a major upheaval which I would rather that did not take place.

Let us talk about some other kind of “Others”. Here is an instance of old people becoming the other. I would very much like to meet this worthy when and if he ever gets to be as old as the people that he suggests die for the cause.

Need I say anything about the biggest “Other”, gender?

Every community has its share of “The Others”, thanks to inadequate education of the different types of people, religions, languages, colour, appearance etc and prejudices and fear drive bigotry and hate crimes besides discrimination.

The latest in the line of many “The Others” is China, thanks to the Coronavirus. It is extrememly difficult to determine how much of it is fact and how much just fake news but, the damage is being done.

If we delve deep into our prejudices, we will find enough and more “others” to keep us discussing them till kingdom come. I have just listed a few here to give a pointer to the IDEA of “The Other” as being our number one Common Enemy.

This is my take on this week’s Friday 5 On 1 blog post topic. The other four bloggers who write on the same topic every Friday are Sanjana, Padmum and Shackman and Conrad.   Conrad incidentally, is the original founder of the weekly bloggers group formed way back in 2009. This week’s topic was suggested by Conrad. Please do go over to their respective blogs to see what they have to say on the topic. Thank you.