noun
the action or process of talking about something in order to reach a decision or to exchange ideas.
“the committee acts as a forum for discussion”
a conversation or debate about a specific topic.
plural noun: discussions
“discussions about environmental improvement”

noun
a formal discussion on a particular matter in a public meeting or legislative assembly, in which opposing arguments are put forward and which usually ends with a vote.
“last night’s debate on the Education Bill”

noun
a talk, especially an informal one, between two or more people, in which news and ideas are exchanged.
“she picked up the phone and held a conversation in French”

1.
an exchange of diverging or opposite views, typically a heated or angry one.
“I’ve had an argument with my father”

2.
a reason or set of reasons given in support of an idea, action or theory.
“there is a strong argument for submitting a formal appeal”

I would rather have one of the first three than the last. By nature I have been made like that and I have always been like that.  Now that I am a Senior Citizen, I am forgiven for being like that. 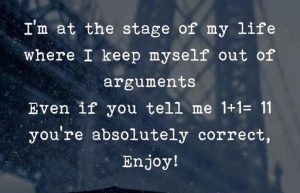 I came up with this topic for this week’s Two On One Friday blog post where Shackman and I post on the same topic. Please do go over to Shackman’s blog to see what he has to say on the topic.