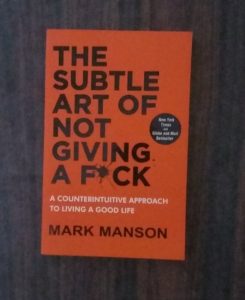 In my post An Unexpected Gift, I had undertaken to review the book that I had received as the gift. I also take you to Ekoshapu’s post where he wondered if I would comment on two observations that he made there and I will combine both the review and my comments here.

First the language. Having braced myself for a barrage of foul language based on various comments and the reviews that I had read, I was pleasantly surprised to find the four letter word more or less disappearing after the first couple of chapters. Once Manson gets into his stride with his message, he does not seem to require the crutches of the f*** word and the reading becomes quite placid. Towards the end he does use it a few times but not to the same intensity as he does in the beginning.

Now to the content. As self help books go, this is one that people of my age, Tammy and Monk, I hope that you agree, can safely ignore. Unlike Manson who is now is his thirties and still with a long life ahead of him, there are two issues that we do not need to address. One, we have nothing to prove to anyone including ourselves, and two, we are quite familiar with the prospect of impending death.

The other recommendations that Manson makes will perhaps be of use to younger, and particularly Western and Westernised Indians grappling with the pressures of modern living and expectations. In other words, people of my age, both Western and Indian have no need for this rethinking. We made our mistakes and learnt from them in a different world with different value systems.

It is still a good read. If you are the type that would like to learn how young minds work now, this is the book for you.

Coming to the two observations that Ekoshapu wanted me to respond to:

1. You can’t be an important and life-changing presence for some people without also being a joke and an embarrassment to others.

I am in total agreement. Over the years, I have come to accept that I will not be universally popular and that there is no point in running a popularity contest. There will be people who will like me for what I am and more who will think that I am not worth a thought. This is indeed life and the sooner one learns this, one’s expectations from relationships of all kinds become realistic and manageable. Manson addressed this issue to those people who want to be liked by everyone. An impossibility.

2. Our culture today is obsessively focused on unrealistically positive expectations: Be happier. Be healthier. Be the best, better than the rest. Be smarter, faster, richer, sexier, more popular, more productive, more envied, and more admired. Be perfect.

It is. No doubts whatsoever in my mind and my response is that I am not a participant in that value system. I am at the twilight of my life and am content with the way I am and with the things that I have. I am in the process of getting rid of things rather than acquiring them and that includs value systems too. I have nothing to prove to anyone, not even to myself.

I hope that Ekoshapu takes my word for what I am about to say.  I never had to struggle for position or possession.  I grew into middle and old age at a time when just having a secure job was a blessing.  Positions and possessions just happened by my being in the right places at the right times and in the absence of strong competition. My favourite quote is and has been for decades:

“Sitting quietly, doing nothing, spring comes and the grass grows by itself.”
~ Basho.

An issue that Manson treats with great attention is “Commitment”. To Ekoshapu, I point out that this is the single most important value to take away from the book. I speak from experience.

If there is one more that I would choose to highlight, that is “The only way to overcome pain is to first learn how to bear it.”