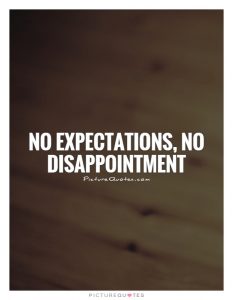 “Disappointment is sadness or displeasure caused by the non-fulfilment of one’s hopes or expectations.”  So, the best way to avoid being disappointed is to be without hopes or expectations and live life on its own terms accepting everything that comes ones way cheerfully and without reservations.

It took a series of serendipitous events to make me a different person from the person who gave them the disappointments which made them come out of their disappointment with joy.  In fact in retrospect, they wondered why I gave them so much to worry about in my earlier avatar when I had it in me to be different.  My answer was always that I was not responsible for the change and that I simply followed life’s diktats and came out of those days smelling of roses.

Like my parents, I also disappointed some employers, who had high hopes for me by quitting their services when least expected to follow the diktats of my conscience or, just to escape unpleasantness in the environments.

It has now been many years since I either got disappointed or disappointed someone else.  That has been a great aspect of retired life where there are no appointments to keep other than those with the medical profession and therefore no room for disappointments! 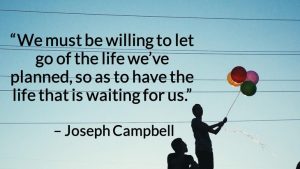 This is my take on this week’s Friday Four On One blog post topic. The other three bloggers who write on the same topic are Sanjana, Padmum and Shackman. This week’s topic was suggested by Shackman. Please do go over to their respective blogs to see what they have to say on the topic. Thank you.

I ordered for a book on our famous kumbhamela from a leading online merchant.

I received an odd looking parcel and I wondered if one of the children had ordered for something else. On opening however I found this inside. I complained to the merchant who has promptly arranged for a refund after taking this back but, I got  a good deal of ribbing from my son and daughter in love for ordering for this book.

Since my grand nephew Finlay and grand niece Josephine love Peppa Pig, I dedicate this post to both of them.

There is an open ground about two hundred meters away from our home where either Manjiree or Ranjan or both take Koko and occasionally  Chutki also, for  exercises in the mornings and evenings. While Chutki goes out with a professional walker twice a day, Koko needs to be taken out by one of them every day.

Koko frolics around while there and is usually very reluctant to come away. She has a couple of friends called Max  and Zimba who play with her with abandon and it is always a sight to watch  them frolicking.

Koko, the brown one,  is totally blind and totally depends on her other senses for her existence. Just look at her spirit for all that big handicap and look at Max in the first video and Zimba in the next  who are so careful with her.

My readers will recollect what my daughter in love did for Deepavali.

She is back at it for the Christmas and new year festive season here. She has decorated our verandah with lights and I learnt how to take a video clip too! Facebook reminded me and my family of an outing six years ago about which I had blogged here. Naturally, all of us are reminded of that day when Chutki was a pup recovering from the fractures in her hind legs.

Today, Chutki is a big girl and does not need that kind of looking after but, the hind legs are giving her trouble and she spends most of her time simply lying around either on her favourite perch the divan in the drawing room or close to wherever one of us is at any time. The presence of Koko sometimes excites her but, mostly annoys her as Koko is still a pup and very playful and frisky.

This is the latest photograph of Chutki on her favourite perch. 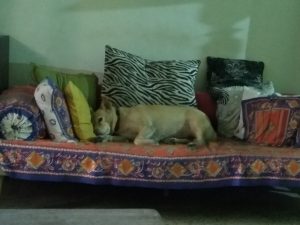 And here is one with both of them.