Please be a little patient with me. This story has to unfold in a particular way for my overseas readers.

I am not a coffee person but, my late father was. When he came to live his last few years with me, he was not satisfied with the instant coffee that was available in Pune and wanted the traditional South Indian coffee made twice a day for him. That was made exactly as shown in the above video for him by me and I became quite an expert in making it. 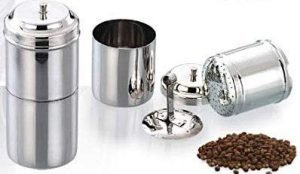 After my father died, all these were stowed away and I even forgot all about them till last week I got a cryptic message on my phone from a stranger advising me that I was to expect a set of brass vessels from someone called V S Mani. Since I had not ordered anything from them, I probed and found another cryptic message from my dear and one and only sister that she had arranged for it in memory of our long departed uncle named V A S Mani who always called himself Victory Always Sure Mani.

The parcel duly arrived this morning and it contained this combination: My son, who is a coffee addict promptly tried out the coffee and certified it to be of excellent quality and recommended it highly to me. I shall shortly try it out as it does not need a filter and it is the instant variety. I have however just stowed away the brass vessels as I have no use for them.

I hope that now the topic for this post and the contents justify each other.

Do you drink coffee? Do you go through some rigmarole like what is shown in the video? As my readers know well, I am fascinated by synchronicity in my life. When it happens, I am not only zapped but, also full of wonder at the occurrence.

I am fascinated by Maratha history and this morning I went online to check on some matters relating to Malhar Rao Holkar, one of our great historical heroes. I did this to follow up on something that I saw last evening on a TV serial on his daughter in law Ahilyabai Holkar.

I was interrupted by a call from a friend who like me is a pluophile and lover of Hindustani Classical Music, asking me to read a WhatsApp message that he had sent me.

The message gave me a link to a Youtube clip of Ustad Rashid Khan singing Raag Malhar.  Both the singer and the raag are favourites of mine the latter particularly in the monsoons.

So many things leading me to an amazing experience of great weather and fantastic music.

There is a remarkable clip doing the WhatsApp rounds showing Salman Rushdie comparing the plague of the 17th Century and what is happening now.

Without much ado, I leave my readers to come to their own conclusion after reading this article and also watching the clip inserted there.

“I bought a miniature 1952 Citroen – here it is alongside a snap of the real thing starring miniature versions of my three uncles. The 1952 Citroen was a favourite of my father and uncle. My childhood friend Vela too was very fond of it and had one for many years. I still remember driving his car, trying to shift the gear shift on the dashboard with the handle coming off in my hands.

Here is a video that I came across that explains why this is so. I hope that you enjoy seeing this and learning something new.

This is a painting called Guernica by Pablo Picasso about which a story has been doing the rounds in WhatsApp. I have tried to check the veracity of the story with no success. Wikipedia has this comment: “Picasso lived in Paris during the German occupation during World War II. A German officer allegedly asked him, upon seeing a photo of Guernica in Picasso’s apartment, “Did you do that?” Picasso responded, “No, you did.”

I reproduce the story as received in WhatsApp as, I find it quite impressive.

The coolest line in history

During the Nazi occupation of Paris, Pablo Picasso was taken to be “interrogated” by a special branch of Gestapo that had been set up to handle intellectuals and artists.

The officer who confronted Picasso, in spite of being a Gestapo thug, was almost polite, spoke good French and seemed even educated. A rarity.

The Nazi policeman gestured Picasso to sit in front of his desk, then he produced a photo of the now world famous “Guernica”, the large painting that depicts Picasso’s take on the Nazi bombing of the Spanish town of the same name during the Spanish Civil War.

With that facial expression that at the same time betrays tolerance toward a recognized genius and anger for a misdeed of the same genius, the Nazi pointed at the photo and said with a harsh voice:
“Picasso! Have you done this?”

The reply of Picasso was worthy of a Nobel Prize, a Pulizer and an Oscar…