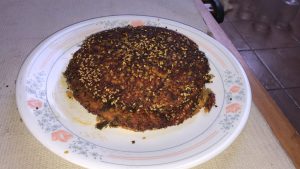 One of the cherished memories that I have of Ahmedabad where I went to Business School in the mid sixties of the last century is having a Gujarathi dish called Handvo. My readers may remember that I had written about having it last July.  I had it again for lunch today and the image above is of it before I dug into it.

With little to occupy my attention nowadays and being unable to stand for long and cook, I have taken to ordering some dishes that I am not confident of getting made by our help.  I prefer to get them from restaurants offering take away services and also from home businesses that have now mushroomed with the advent of Covid. I was able to locate one such lady entrepreneur offering home made Handvo and duly placed an order on her for collection earlier today. Collection because she clearly indicated that she would not be able to make home deliveries.

My daughter in love duly went to collect the Handvo and the lady asked how we found out about her. There is another story behind that which too needs to be recognised.

With the onset of the pandemic and the lockdowns, one Lady Senior Citizen of our neighbourhood started a Senior Citizen WhatsApp group to offer a platform for seeking help, support and information for Seniors. This group is very active and has been a source of information for us for many things including food suppliers. My source for information on the Handvo supplier came from the lady Administrator of the group and I duly passed on that information to the former.

I have decided to start another series on food that I like and either make or order from outside to keep my readers informed about my progress as a foodie.

Are you, my reader, able to indulge in such way through home entrepreneurs?

A cousin who I am in regular touch with sent me this poem yesterday in WhatsApp.
VOID IN LIFE

He explained later that it was from a dear friend of his who had recently lost his wife.

Having experienced the loss of my wife I could relate and was mulling over the experience when my door bell rang, unusually by someone ringing it three times.

It spoiled my reverie and I went to open the door fully determined to let whoever it was who had done that a piece of my mind only to find that it was my elderly neighbour. On seeing her, my mood immediately changed and I opened the door to find out what prompted her to come over as, she rarely leaves her home as both she and her husband are not in the pink of health. I had not seen either of them since the outbreak of covid early last year.

She wanted to come inside to meet “Memsahib”. I thought that she wanted to meet my daughter in love and said that she was off at work and will return only late in the evening. She then interrupted me to ask to meet my wife.

I was totally zapped and told her that my wife had died twelve years ago. On hearing this, she broke down and I had to bring her in and make her sit down to recover. I then understood that her illness also included some element of dementia as, she kept talking about things that were ancient.

I had to calm her down, pacify her, talk about other things about our neighbourhood for about fifteen minutes and then escort her back to her home just across a landing from ours.

This was an unusual coincidence and I am still wondering if some kind of message is being sent to me!

What do you, my dear reader, think? This was perfect for a fussy character like me who could not afford to pay pressing charges in hotels during overseas tours due to severe restrictions on foreign exchange allowed to us those days. Drip dry shirts and polyester blend suits made it easy for washing and ironing one’s own clothes.

Much before that, during my school days, I had got into the habit of ironing my clothes and that habit has continues till today. I still iron my  clothes and enjoy wearing crisply ironed ones every time I go out. I of course use a proper steam iron and an ironing board like this. I however do not do too many items at a time as I find it difficult to stand for long. Just the two pieces that I will need for the day.

The discovery of the portable iron led me to reminisce about my travelling days as well as my obsession with ironed clothes AND another very impressive quote from a favourite actress. I don’t think that I am spoiled. What do you think?

Today a classmate from school and good friend turned 80. I rang him up to convey my greetings and best wishes for many more birthdays and he was quite nostalgic about our last meeting in 1965. Yes, I left Madras as it was then known and, now as Chennai that year but, he has continued to live there since.

Among other things that we talked about, we did discuss our current health and well being issues and wished each other well.

After a while, another friend also about my age sent this message to me in WhatsApp. 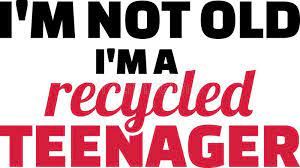 There were some more messages, all in one day, talking about and dare I say, belittling, trivialising and or giving excuses for old age. And then there was this very heart warming story in Jean’s blog which brought a smile on my life.

This got me thinking about ageing and how today’s social media is trying to talk about it in a manner totally different from what it used to be in the ‘good old days’.

Elders were admired for their longevity and hopefully, wisdom and were expected to behave like elders. Their maturity was taken for granted.  They were not recycled teenagers.  And, they had and continued to live and died, like I do now and will eventually. My friend SG had this to say on his Facebook post: “This is probably a sure sign that I am getting old, but I absolutely love “Gone Fishing” with Bob Mortimer and Paul Whitehouse. Stunning locations, gentle banter and great fishing – what’s not to like?”

That took me back to the early nineties of the last century and Chris Rea.

I posted this in response to SG and we then exchanged the following messages.

SG: Please watch the programme if you can. It is on BBC 2 here, I think. It is hosted by two aging comedians in their early 60s who are recovering from life threatening health conditions, so a lot of meditations on life and mortality (all presented in a light-hearted way).

I: I have seen a few clips on youtube recommended by some friends. Quite interesting but, not my cup of tea. I am not as old as you are.

(There is over two decades of age difference between us.)

For those interested, the lyrics for Chris Rea’s song:

I’m going fishing
I got me a line
Nothin’ I do’s gonna’ make the difference
So I’m taking the time
And you ain’t never gonna’ be happy
Anyhow, anyway
So I’m going fishing
And I’m going today
I’m going fishing
Sounds crasy I know
I know nothing about fishing
But just watch me go
And when my time has come
I will look back and see
Peace on the shoreline
That could have been me
You can waste whole lifetime
Trying to be
What you think is expected of you
But you’ll never be free
May as well go fishing.

“I know a lot of people have remarked to me they have listened to the record, “I like that song, that’s what we should do, just go fishing, forget about everything”. The funny thing about that song is as I say in the song, I don’t know anything about fishing. he bottom line of the tune is that when you get to the last day of your life and you look back, and you see how many hours you’ve spent in traffic-jams, pushing and shoving, how many hours you’ve spent elbowing people out of the way and being elbowed out of the way; You just thing to yourself I wish I had all them hours back, cos I may as well have gone fishing…”

A very dear friend has sent me this message on WhatsApp. It is a tribute from a son to his late father who was a Medical Practitioner. I wish to share it with my readers as, this is an unusual request which touched me deeply as I am sure it will my readers.

“August 1st will mark 8 years since my dad passed away. I still think of him every day.

There are two kinds of intelligence, in my book. One is conventional intelligence, the other is disruptive intelligence. The latter is the kind that changes the world – through a scientific breakthrough, or the development of a new drug or technology.

Baba’s intelligence was the latter – a ferocious, disruptive intelligence, that, combined with his courage, his insistence on questioning everything, integrity, compassion and impish, irreverent sense of humour, made him special.

I haven’t inherited that level of intelligence, but hopefully have inherited some of his other traits.

I always remember how his shoulders shook and his eyes crinkled when he laughed. I remember how when we visited the small town of Almora in the Himalayas on vacation, he would dispense free medical advice and medicines he paid for himself, to dozens of poor villagers who would line up outside my grandfather’s door every morning. He asked for nothing in return. I remember his courage at the end of his life, when he calmly told me he would die that very day, after seeing his own electrocardiogram.

I remember everything. The greatest lesson he taught me was to take nothing at face value, and to investigate everything, and only believe something if it was rooted in fact and backed up by evidence. He was afraid of nothing, and would never back down if he knew he was right about something.

So on August 1st, it would be great if you could take a moment out of your day to remember a remarkable man.