Arun Shourie is a remarkable human being and he writes extremely well. In his book ‘Governance and the Sclerosis That Has Set In’ in his typical style, he writes about how bureaucracy works based on actual experience that he had as a Central Minister in the Indian Government. It is too funny not to share with my readers.

Sometime in early 1999-I was unable to fix the precise date-two officers in the Ministry of Steel made some notings on the files that passed through their desks. What caught the eye of their colleagues and superiors was not anything they had written, but the fact that they had used red and green ink. Accordingly, on 13 April 1999, the Ministry of Steel wrote a “D.O. letter” to the Department of Administrative Reforms and Public Grievances. Can officers use ink other than blue or black, the Ministry wanted to know. Are there guidelines on the question? If so could these please be forwarded to the undersigned.

The letter arrived at the Department of Administrative Reforms six days later though the buildings of the two organizations are less than a kilometer away.

The Ink-Blotched FileResearch began. Consultations commenced. Ultimately it was decided that, as the matter concerned ink and as the Directorate of Printing had the requisite expertise on ink-related matters, the opinion of the Directorate had to be obtained.

Accordingly an “O.M.”-an Office Memorandum-was sent on 3 May 1999 to the Directorate of Printing. Will the Directorate kindly clarify whether any effort is authorized to use any ink other than blue or black for noting, drafting and correspondence in the Secretariat?

Deliberations, consultations, cogitation now began in the Directorate of Printing. After three weeks of thought, on 21 May 1999, the Directorate wrote to the Department of Administrative Reforms. There are no orders/instructions/guidelines in respect of use of different colours of ink, they noted …. The Department of PersonnelandTraining, Ministry of Home Affairs, may, however, be consulted, they concluded….

A perfect answer, as you can see. Throw the ball back.

On 28 July 1999 the officer concerned in the Department of Administrative Reforms recorded that as the decision on the use of different colours of ink has to be taken by the Department itself, the criterion for adjudging the issue should first be settled. He proposed that the matter be judged in terms of the longevity of the notings in inks of different colours. When a file is closed, he noted, it is recorded as “A”, “B” or “C” category.

In case it has been designated as an “A” or “B” category file, it has to be kept permanently. Hence, the colour of the ink that is used for noting and correspondence in the file should be long lasting, and it should not fade with the passage of time. The matter, went the concluding recommendation, may be taken up for discussion at the Senior Officers Meeting.

The next level of officer to whom the file went reasoned that the matter was not as simple as that. Accordingly, he recorded that the longevity would also be affected by the quality of the ink that had been used, as well as on whether ball-point pens or ink pens had been used. So, these factors needed to be decided along with the question of the colour of the ink.

In view of the criterion that had been agreed upon-the durability of the noting-and the multiplicity of factors that were likely to affect it-the colour of the ink, the quality of the ink as well as the type of the writing instrument that had been used, it was felt that views of the National Archives of India had to be ascertained. After all, they are the ultimate custodians of Government records….

The letter from the National Archives was accordingly placed before the Senior Officers’ Meetingon22September 1999 …. Consequent on the decision taken, as the phrase goes, in the Senior Officers Meeting, a D.O. was addressed on 4 October 1999 to the Joint Secretary (O&M) in the Ministry of Defence seeking a copy of the instructions contained in the relevant manual of the armed forces/ Army so as to finalise the implementation of a Uniform Ink Colour Code in the Central Secretariat. The same day another communication was sent to the Department of Personnel andTraining seeking instructions on the subject. Incidentally, such instructions are available in printed form.

The Department of Personnel and Training reiterated that the matter is essentially a part of official procedure, and would accordingly be the concern of the Department of Administrative Reforms and Public Grievances… A reply was finalized on 5 April 2000 for the Ministry of Steel, the original querist, so to say….

But there was a much more consequential outcome. Two additions were made in the Manual of Office Procedure- a singular achievement. The bureaucratic equivalent of getting a new word into the Oxford Dictionary. Chapter 6 of the Manual deals with “Action on Receipts”. It was enlarged to include para 32, sub-para 9 which now reads:

“Notes and orders will normally be recorded in note sheets in the Notes Portion of the file and will be serially numbered. Black or blue ink will be used by all category of staff and officers. Only an officer of the level of Joint Secretary to the Government of India and above may use green or red ink in rare cases.”

A good bureaucratic solution, as you would have noticed: discretion allowed but not circumscribed!

And Para 68, sub-para 5 of the Manual of Office Procedures now reads:

“Initial drafting will be done in black or blue ink. Modifications in the draft at the subsequent levels may be made in green or red ink by the offices so as to distinguish the corrections made.”

Another good solution, as you would have noticed: neither option ruled out; a proper function for each option.Someambiguity, of course. Para 32(9) says that only officers of Joint Secretary level and above may use red or green ink, and that too only in rare cases. Para 68(5), on the other hand, does not limit the use of these colours to any particular rank; and it does not say that the corrections and amendments for which the colours are used have to be of an especially rare kind.

Solution? The two sub-paras are to be, as the courts remind us, “read harmoniously”! Even then, not all problems have been solved, I am constrained to record. After all, in view of what the Deputy Director of the National Archives had pointed out, may it not be that the ink that is being used by officers does not bear that ISI mark?

Some of my readers will remember my post on mail addressed to my late father advising him about his life after superannuation.

A friend who remembered the post has now sent me this photograph. Please click on the image for a larger resolution. 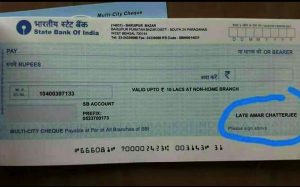 State Bank Of India is one of the world’s largest banks and India’s largest. It is a public sector bank with good reputation for customer service. My late father and I had a joint account there for four years as he trusted them and we never had any problems with them. My dealings with them on the few occasions that I had to go to them were all handled with efficiency and good cheer.

This however is another instance of not applying one’s mind to an important matter.

I dedicate this to my good friend Narasimha for his interest in geriatrics.

I received this as an attachment to a mail with no text on the mail. I leave you to decide whether I should have laughed or cried. Please click on the image to get a larger resolution. A young friend, wiser much beyond his physical age,  and I were discussing modern education in India compared to what prevailed in earlier times and this little exchange came up as a stunning revelation.

Me:  “Yes.  Standards and values have touched rock bottom levels.  Our graduates and diploma holders are unemployable and have to be retrained by employers.  The result of rote learning and studying to pass exams.”

Friend:  “The problem with our times is not that people can’t follow the grammar of virtuous living. That disappeared long ago. Today we don’t understand even the grammar of adultery, prostitution, corruption, bribery, theft, etc.  We don’t know even how to do these in an intelligent way.   That’s how low things have become !  And that is a very big problem …”

Please click on the image to get a larger resolution. I tried five times to repost the comment and failed and left an innocuous comment which was promptly published.