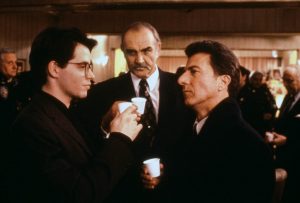 By accident, I don’t usually watch movies on television, I watched Family Business, a 1989 movie with two favourite actors, Sean Connery and Dustin Hoffman. And, as a bonus, I discovered another good actor, Mathew Broderick. My daughter in love was watching the television on one of the pay and see channels, and I just happened to catch Sean Connery on the screen. I shelved going off inside to my room and stayed on to watch. I am glad that I did.

I can’t for the world, recollect how I missed seeing it when it was first released. With the two favourite actors like that, I would have normally gone for the fist show on the first day of release. Be that as it may, I was totally zapped seeing this film for the complex relationships that it portrays so ably.

I have known real life stories of grandson / grandfather relationships bypassing son / father relationships and I could immediately see the dynamics that the story and the director were trying to convey. I could also juxtapose to my own relationship with my uncle which annoyed my father no end and understand the equations.

I intend watching it again either on the TV or by getting a DVD.