The last post on Nostalgia that I wrote was in September last year. I find it strange that there have not been other triggers that could have led me to write other posts since then.

Be that as it may, there is another trigger which brings back so many memories that I have been revisiting many incidents that I had experienced those days. I had responded with “As a travelling salesman in the sixties of the last century, the holdall was an absolute necessity. I slept in trains, waiting rooms and once even in a police station with the permission of the inspector because I missed the last bus. The suitcase with the khaki cover shown below too was part of all regular travellers as the cover protected the expensive suitcase.”

The holdall shown above was a long canvass bag with a pouch at each end. One first placed a covered in cotton cover mattress like this in it. 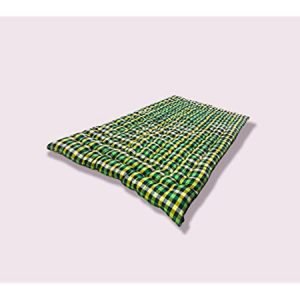 The holdall contained other pockets to keep other things like clothing or books or whatever and had a handle to carry it with ease.  The pouches on both ends inside were also used to store clothes and other materials below the pillow and the sheet/blanket.

The khaki cloth covered suitcase at the bottom was another familiar sight among regular travellers as, the suitcases were either made with pure or imitation leather and were very expensive. All luggage stores those days had either an in-house tailor or one close by who made the covers on the spot after one bought a suitcase. Believe me, these suitcases were covered because they were expensive and had to be protected to last long.

A tour normally would be of three weeks duration, sometimes taking a few days more on emergency calls.  We depended on the Indian Postal Service for Care-Of-Post Master mails and to receive and send money and mail.  We carried Postal Identity Cards without which we could not use those facilities.  We also had to strictly adhere to the pre-drawn itinerary so that mail could be collected.  One did not use the telephone those days unless in emergencies as calls were expensive.

Almost all the travellers of those days that I knew had the habit of reading and all major Railway Stations had book stalls that sold books and magazines besides daily newspapers.  That and where one could, seeing movies in the local theatres were the only ways to fight loneliness.

In retrospect, when I now compare today’s travellers to those of then, I can’t but wonder how we and I particularly survived those adventures sleeping where we could, using laundry facilities where we could and eating food in all kinds of outlets.

Have you ever used or come across such holdalls and covered suitcases?