I experienced a very painful attack of food poisoning early last week and the cure which included some strong antibiotics, was worse for its side effects. While the pain disappeared, the unease and listlessness lasted well into the weekend but, the worst of it all was my inability to sleep like I am used to.

Anyway, after the major side effects wore off I decided to go for a hair cut and a head massage with my usual barber. The head massage should have made me sleep well but, it did not.

So, yesterday, after almost after a year, I went for a pedicure and foot massage and that did the trick. 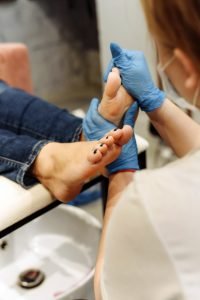 Another of the small pleasures was my having overslept. I woke up this morning, two hours after my normal time and found myself totally refreshed and amazed at having over slept.

The best of the small pleasures however was that after over a couple of decades, I did not have to make my morning mug of tea and had the pleasure of getting one delivered by my daughter in love.   She had woken up at her usual time, and having seen me oversleeping, let me do so and waited for me to wake up to give me tea.

I wonder if there is a moral there somewhere in that story!