I had gone visiting three friends yesterday and one not only extended me great hospitality but, also gifted me with a nicely wrapped packet with the title “Predictions Of Agastya”. He not only wanted me to take it home before opening it but, also requested that I read it and give him a feed back about the efficacy of the predictions. I duly did as requested on reaching home and found this book. He further informed me that since I am a Vedica / Advaitin, I should find Agastya interesting and that is why he had bought this for me. 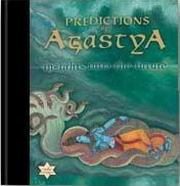 As I lifted the book off the table after unpacking the packet, I found another item at the bottom made out of a piece of paper printed with random numbers pasted on a cardboard with a subdued subtext in Sanskrit reading Om. Nothing crude about it and a very nicely done job. As I inevitably do with new books, I also wrote on the first page the date on which I got the book and from whom. I settled down comfortably in my recliner and opened the book to find that each numbered page gave a general balderdash about stars and planets and below that a particular prediction for the immediate and long term future. I went back to the first page to see what this was all about and read the preface to the book giving instructions to keep the numbered grid near one’s puja alcove and place the flower one offers to one’s personal deity with shut eyes on the board and see the predictions for the number in the corresponding page number in the book.

In other words, just a lot of horoscope mumbo jumbo like one would find in any daily or weekly horoscope published in our news papers and periodicals here. Like what I had written in my blog post Horoscopes.

I went to the last page to find if I could find some more information and found a couple of paragraphs introducing the reader to the writer and artists involved in the production of the book with nary a line about the name of the publisher!

I rang my friend up to give my feed back and started off by saying that it is a rip-off and he had a good laugh saying that he too had found it to be so and decided to play a practical joke on me! I went online to find some details and found that the package would cost $15.37 a pop! I very expensive practical joke indeed!

Welcome to the Friday Loose Bloggers Consortium where Anu, Ashok, Conrad, Delirious, gaelikaa, Grannymar, Magpie11, Padmum and I write on the same topic. Please do visit the linked blogs to get nine different flavours of the same topic. Today’s topic has been chosen by Conrad.

My late mother used to tell me often that when I was born, the first and that too a male child, I was the center of the universe. I don’t remember my father telling me this in my younger days but, in the initial days of his moving in with me, he used to say the same thing while reminiscing about those days and how he bought a brand new car to fetch me from the nursing home. My late wife was a captive audience and could understand this well, as when our son was born, he was the center of our universe too.

Two sons followed me and the novelty wore off I suppose. With three males in the household the future of the lineage was assured and so my parents decided to try till they produced a daughter to pamper. Six years after my birth, that ambition was achieved and we were blessed with a sister, the apple of all our eyes and yes, the center of our universe again.

With growth, all of us had our centers of universes in due course. And all of them, with a bit of luck are flourishing.

For all these centers, the universe itself kept expanding, as I am told on excellent authority, our real universe too is. It is an ever expanding entity with apparently no limit to its growth. Like my family’s centers, our earth which is for us the center of the universe is yet to come to grips with the fact that there could well be other centers of the universe. By that I mean of course that there could be other planets with life in them who may well be thinking exactly as we do about our own planet. I am sure that like my family’s flourishing centers, the other planets also must be flourishing.

In the Indian philosophical system, the Universe is called Brahman.

In other words, the center and the infinite are the same. David Bohm compares the phenomenon to a hologram. He describes all matter, and everything really, in an implicate order that we cannot perceive. The implicate order is like an interference pattern of energy waves, interacting with itself. He then goes onto say that consciousness receives these waves like a radio antenna receiving radio-waves and translates it into the explicit order: The world we normally experience. He also states that it provides explanation to phenomena such as quantum tunneling and, the one with particles being in two places at the same time.

Bohm was very much into Indian mysticism when he made this startling statements that has left the world of science in quite a conundrum.

For me, as a Vedantin/Advaitist, it makes eminent sense. I AM THE UNIVERSE AND THE UNIVERSE IS ME. There however cannot be a center!

After all that pontification, here is some food for thought.