According to Ayurveda, humans can detect six flavours, sweet, sour, salty, bitter, pungent (hot and spicy as in chilli peppers) and astringent (light and dry as in pop corn).  I am fortunate that I do not have any medical condition that prevents me from enjoying all the tastes, though not at the same time.

In the Western system however, “Taste” refers to our five sensitivities — sweet, sour, salt, bitter, and umami. I had to ask the meaning for the last from Google uncle .

When you bring “Flavour” into the equation, it  is a “hedonic” sense involving smell, texture, and expectation.  The problem usually is with the last.  I know / knew a large number of people who are never satisfied with what is offered on the table.  They will always find fault because, they had expected something totally different from what eventually was produced.  This is true for even cooks who do not like what their concoctions turn out to be!

Both the words “Taste” and “Flavour” however, are used in different ways to describe phenomenon other than that for the palate.  For instance, “he has a taste for the bizarre!”  I wonder how that would taste on someone’s tongue! “The flavour of the local slang in the larger linguistic study is conspicuous by its absence.”   I can however understand the statement “Taste for the good things of life.”  Here, as long as it restricts itself to food and drink, it makes sense, but when it includes say, furniture, mistresses etc, I am stumped.

When it comes to “Taste” or “Flavour” in any sense, I am what is known as Ashutosh in India.   How about you? 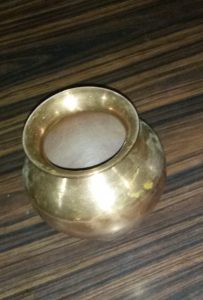 For the past twenty odd years this copper pot has been my faithful companion every night. It would be filled with drinking water by around 4.00 pm every afternoon and kept near my bed for me to drink about half of it as soon as I wake up in the morning on an empty stomach.

I started the practice as part of my daily morning routine on the advice of an Ayurvedic Doctor as a healthy habit. I can vouch for its efficacy as I always feel the difference to my sense of well being when I am out of Pune and am denied this morning habit. Drinking water first thing in the morning from the glass bottles or other vessels helps but it is not quite the same thing as drinking water stored in a copper vessel. 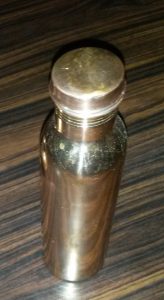 A week ago, I found that the vessel was leaking and so had to find a substitute. Uncle Amazon helped me source a modern equivalent and once it arrived I have bid goodbye to the old vessel. Manjiree insists that the leak can be stopped by some copper vessel makers in the old city and will take the vessel one of these days there to see if it can be done. If it can be, all for the good and I will revert to keeping that beside my bedside while keeping this new baby as a standby. In the meanwhile, I will be using the new copper bottle as it is called by Amazon.  Back to being bottle fed?  Perhaps apt for a second childhood!

The best form of relaxation for me is to get a full body massage from my regular masseur who is almost totally blind and nature has compensated him for that handicap by a highly sensitive touch. He massages me from top to toe following a systematic routine and uses whatever lubricant that the client gives him. I use an ayurvedic massage oil. The routine lasts an hour and it removes all the kinks from the body like nothing else does.

Ideally I would prefer to go for a full pizhichil treatment, but for that I have to go to the city and the commuting takes the pleasure out of it.

The trick is in having a steaming hot shower/bath immediately after the massage and after that, have a nice lunch and take a nap. When you wake up, you will feel like a zillion rupees. I guarantee that. Commuting, delays that post massage pleasure.

I hope you enjoyed reading this post on the weekly Friday Loose Bloggers Consortium where thirteen of us write on the same topic. Today’s topic has been chosen by Delirious. The twelve other bloggers who write regularly are, in alphabetical order, Anu, Delirious, gaelikaa, Grannymar, Maxi, Maria SF, ocdwriter, Padmum, Paul, Rohit, Shackman, The Old Fossil and Will. Do drop in on their blogs and see what their take is on this week’s topic. Since some of them may post late, do give some allowance for that too!