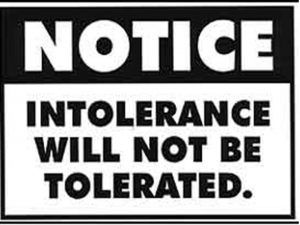 Intolerance is defined as an unwillingness to accept views, beliefs, or behaviour that differ from one’s own; or an inability to eat a food or take a drug without adverse effects.

Having suggested this topic for this week’s Friday 2 on 1 blog post, I shall address both and perhaps something else as well. Please do visit Shackman’s blog to see what he has to say about the topic.

Unwillingness to accept views, beliefs, or behaviour that differ from one’s own.

Ever since India’s Rightist Hindu Nationalist party, the BJP came to power in 2014, this word became synonymous with the Leftist Intellectuals in India and all kinds of things happened. Minor incidents of law and order took on communal tones like Hindu vs Christian, Hindu vs Muslim and Upper castes vs Lower castes and so on. Some took to mass media to condemn the majoritarianism implied in the result of the elections, some returned awards given to them by the previous dispensation as a means of protest, without however, returning the cash elements that went with those awards and generally made, what in my opinion was fools of themselves.

These were the English speaking, reading, writing urban self appointed intellectuals and their tantrums, simply did not reach the people who were none ot the above. The BJP came back to power last month with an increased majority in our parliament and now one sees the same breed of Tolerant Intellectuals analysing the results and coming to the conclusion that they misread the public mood and orientation. Some of these elements wrote for foreign publications as well crying themselves hoarse that doomsday is about to descend on India. As my readers can see, nothing like that happened and some even changed their tones post analysis of the results.

Being a Rightist supporter of the BJP, I tolerated these elements while they were intolerant of me! Now I am enjoying watching them squirm and the Schadenfreude is entirely enjoyable.

That is the beauty of intolerance. The ones shouting loudest that the other is intolerant is entirely unaware that they are being intolerant of the other to start with! And being completely detached, I simply enjoy trumpeting my own intolerance of the intolerant.

Coming to other types of intolerance, I know some wealthy people, the not so wealthy simply cannot be so, who are intolerant of the elements. During the summer months, they disappear to cooler climes and during the winter months to warmer climes. During the wet months they refuse to get out of their homes lest they get wet and miss out on a lot of fun. These people are also usually intolerant of everything around them and totally insatiable be it about food, drink or relationships.

I also know the unfortunates who are lactose intolerant or gluten intolerant or some other intolerant and I feel sorry for them while being grateful that I am not any of those. On the other hand, I recently discovered that I was allergic to one particular type of new antibiotics and it was entirely providential that I had anti allergy medication at home as otherwise, I would have been dead with the reaction I had after consuming that medication. Now that my doctor, family and I know that I am intolerant to it, hopefully there won’t be a next time.

Intolerance can take other shpes too and one of the most common in India is the mother in law, daughter in law conundrum and / or the older generation, younger generation one. Here again, it is difficult to do anything about it when one comes across it but one can be grateful that one does not go through this in one’s own life.

I am sure that there will be other types that my readers have come across in their experiences and I look forward to receiving comments on them.

It is finally out in the open. As much as I would have liked not to write about it, the knives are finally out. The forthcoming elections for our parliament has brought the inconvenient truth out!

The first salvo was formally and officially fired by the wannabe next party to form the government, Bharatiya Janata Party (BJP) against the incumbent UPA (United Progressive Alliance).

There has been a massive cover up of local involvement in the carnage for political purposes by the Congress government of Maharashtra in which state the city of Mumbai is located. All for what is called vote bank politics, an euphemism for Muslim appeasement. Every child in Mumbai knows that there were locals involved and they were Muslims. Why this cannot be brought out in the open and handled like a democracy should, is beyond my understanding.

By trying to hide it, the UPA government has given Pakistan a handle to whip India with and also an opportunity to the BJP to whip up Hindu chauvinism.

I believe that the Indian Muslims are capable of handling the fact that there are elements from within that are part of the global terror network and that they do not form the mainstream. Why the Congress party and its so called secular allies cannot accept this simple fact is beyond my understanding.

Now the UPA will go on the back foot and the entire election process will become a farce.

Heavens help my country. It is despite such nincompoops that we have managed to survive reasonably successfully so far and I suppose will in the future too. Just imagine what we could have achieved if only they had been different!