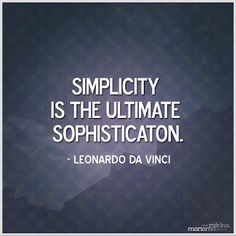 Dada Vaswani is a much in demand person for the Sindhi diaspora. He is therefore a much travelled man who has seen more of the world than most of his followers would in a lifetime. He was once asked by a follower as to which in his opinion is the best city in the world and without a moment’s hesitation replied “Simplicity.”

Is there such a city anywhere? I doubt it. But we can make ourselves live in simplicity which as Da Vinci points out is the ultimate sophistication.

Let me share with you my idea of the ultimate simple man.  He is Jack Reacher.  He does not have a home and lives in the clothes that he wears changing them every few days in a supermarket.  He sleeps in motels and in whatever mode of conveyance that he uses to drift.  He just carries a toothbrush in his pocket.  I have written about him earlier and in that post had also introduced a great simplicist blogger Tammy.  I had also mentioned my own regrets in the following words.

“My one regret in life is my physical limitation that prevents me from taking to the life of a Sadhu.  Indian Sadhus are somewhat like Reacher except that they do not get into the kind of adventures that the latter gets into, nor are they likely to be retired Military Police officers. These are the people who have successfully broken out of houses as Wilder suggests most would like to.  I would dearly love to and take to a life of wandering not quite begging to survive but like Reacher living on the move with no baggage.”

This topic was suggested by Padmum for the weekly Friday Loose Bloggers Consortium where currently nine of us write on the same topic every Friday. I hope that you enjoyed my contribution to that effort.  The seven other bloggers who write regularly are, in alphabetical order,  Ashok, gaelikaa, Lin, Maxi, Padmum, Pravin,  Shackman and The Old Fossil. Do drop in on their blogs and see what their take is on this week’s topic. Since some of them may post late, or not at all this week, do give some allowance for that too!