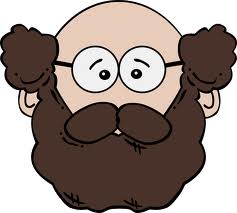 The wait is over.  I have now carefully perused all the responses to the poll and have decided to bow to the wishes of everyone.

I shall keep the beard.  I don’t need to be a lumber sexual when I am compared to Sean Connery!

“Appa you are the Sean Connery of our area, the Don of Kalyaninagar and my Santa…. Not Santa Singh but Santa Claus.

So to do justice to all those characters please keep the beard.

For some clarifications for those who do not know Hindi.  Kalyani Nagar is the name of the suburb where we live.  Santa Singh is the Indian equivalent of Murphy of Ireland, the butt of all jokes.  Naakaam translates to Useless and Bahu to Daughter In Law.

There Tammy, even the Bahu thinks that I am Sean Connery!

I am indebted to Maria of Sliver Fox Whispers and Gaelikaa for the inspiration for this post.

In her response to my observation on my post on Flames, Maria the Silver Fox

wrote -“Well, I went from your blog to Magpie and I found myself enthralled with metal compounds and fireworks. Then I thought, “Ramana needs to know it is not just about a flame, but it is also all about the fireworks!” I have to laugh because I write to you as comfortably as I write to my own brother.”

I responded -“I am flattered. In India, we have a system of women adopting men as their brothers by a simple ceremony of tying a string around the wrist of the men. The men then are obliged to protect and pamper the adopted sister! Have a look:http://en.wikipedia.org/wiki/Rakhi_day”

responded – “That is a great idea Ramana Bhai. I shall tie a rakhi on you when we meet (whenever that may be).”

Now the problem is, that somewhere along the way in this exchange, our two Marias have got mixed up!

When I read the Ramana Bhai, I knew that we have got our Gaelikaa, aka Maria responding. I don’t mind having two Marias tying rakhis on my wrists, but, I do not want either getting confused about the other as I was for a while.

To get back to the business at hand, we have a festival in India called the Raksha Bandhan. Let experts write about it and, here is a link to one blog which explains it quite well.

Our son Ranjan has a much cherished Rakhi Sister, Zainab. She was his classmate in college and made him her Rakhi Brother. The two of them are a treat to watch when they are together. In due course, I shall post a blog about Zainab to express my admiration for a remarkable young lady who has achieved a great deal under very difficult circumstances.

When we moved into our brand new home in Pune in 1990, our neighborhood was sparcely populated. The complex to which we moved into, gradually got other residents and one of them was the Soans family consisting of Roaslyn the matriarch, her son Lubin a Merchant Marine Officer, his wife Susan, and their two kids Arup and Amrisha. Rosalyn was the classic Matriarch with a background of a life time of teaching children in Bombay. After a couple of years of getting to know each other, I used to be away from home more than at home duing that period, one fine evening, she brought a Rakhi, tied it on my wrist and said, I am making you my brother from now on. Apart from my real life sister, I had never been extended this privilege and to say that I was zapped is an understatement. This resulted in some delicate maneuvering because, Lubin, his sister and her family, Susan and her siblings and parents etc were all calling me by my first name by then and now the realtionship suddenly changed. Lubin and Susan particularly had to start calling me Mamaji, something that our Gaelikaa would understand. In the event, I allowed the gang to continue calling me by my first name.

Rosalyn gave us undiluted love till she passed away in 2003. Whenever she went for a walk, on her return, she would drop in and spend some time with us or more often with Urmeela. Any time some special dish was cooked in their home, it would find its way to our place as well. I do not know whether I gave her the brother she looked for but the bond was quite strong and the bond with her offspring and other members of her family continues to be so, even today.

My sister Padmini sends her three brothers Rakhi every year without fail from wherever she is. Ranjan’s cousins do so for him every year too. It is a great and indescribable tradition that is still alive and kicking even in these days of modernization and hurried life styles. One of the few that is still strong in an otherwise rapidly changing world around us.

Gaelikaa, welcome aboard. You can do the ceremony by snail mail! I promise to tie it around my wrist and shall send you my protection and pampering over the net till we meet and we can do it all in person.

Ramanaji has now become Ramana Bhai. In our part of the world, Bhai has taken on a new connotation! It is used for an Underworld Don! Please be advised that I cannot extend that kind of protection to you! I do not have a “Circuit” to assist me.