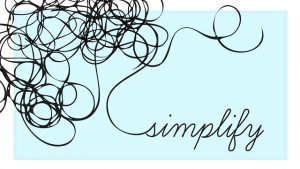 This week’s Friday 2 on 1 blog post title has been suggested by Shackman who claims that he was inspired by our own old geezelle Tammy. She actually is a minimalist and far from a simpleton but, that is word play that I hope she will forgive me for.

Simple Living as per Wikipedia was practiced by Mahatma Gandhi. His contemporary freedom fighter Sarojni Naidu had this to say about that to him. “Do you know how much it costs every day to keep you in poverty?”

I flatter myself that mine is a life on the simple side. That is my perception. Ekoshapu who had visited me for the first time said this about my simplicity. “I, along with my friend, met Ramana Sir on Sunday at his home (mansion would be the right word, considering the super-affluent locality and spacious rooms/garden).” If I were to visit some of my friends who live in more upmarket areas in bigger homes, perhaps I would also say the same thing. The point is that ‘simplicity’ is a matter of perception. For me, being simple is keeping my wants to the barest minimum and finding simple solutions to life’s problems. For instance, while I can and on occasions do use a car with a driver hired on an hourly basis, I would rather use a cab or an auto-rickshaw to go wherever I need to go as, parking and its attendant problems is always a major constraint. On the other hand, Ekoshapu, being much younger and more agile, uses our very reliable public transport bus system to commute within our city. He finds that simpler. Perhaps had I been his age with my present lifestyle, I would have too. In other words, simplicty can be thrust on us too and often is!

I wonder if in our lifetime we will see a major shift from consumerism to simplicity/minimalism as a natural reaction to the former reaching its limits.  A process called Enandriomia.  I certainly see many middle class and affluent families opting for the latter and wonder if a snowballing effect will occur.  On the other hand, for developing nations like India, aspirational impacts on the poor climbing the economic ladder perhaps, balances such reversals.  The next few decades will be interesting to watch.

Not being part of the consumer society is more than enough to have a life of the simple side. I am not tempted to buy unnecessary things with the exception of books. Hopefully, one of these days, even that weakness will drop off like a ripe pumpkin that simply snaps off from the vein.

Do go over to Shackman’s blog to see what he has to say about the topic.