“A niche market is the subset of the market on which a specific product is focused. The market niche defines as the product features aimed at satisfying specific market needs, as well as the price range, production quality and the demographics that is intended to impact. It is also a small market segment.” ~ Wikipedia.

I live in a locality that is filled with Co-operative Housing Societies and a few Condominiums. All of these have many flats, apartments for my American readers, and are usually provided with round the clock watchmen services. These watchmen work in 12 hour shifts and the poor fellows who work the night shifts have to wait till they are relieved in the mornings by the day shift watchmen before they can have their morning tea!

Enter the ever opportunist entrepreneur of urban India. I have been seeing one intrepid soul very early in the mornings hawking hot tea from a bicycle with a stainless steel thermos urn tied securely to the luggage carrier in the back. I have been seeing this particular fellow for quite some time now but was able to get to chat to him only yesterday as both of us caught each other’s eye in the morning.

From him, I learnt that there are many like him all over Pune, and that the service starts at 0500 and goes on throughout the day focussing on watchmen only but also catering to others who may stop them on their rounds. To do this effectively, the urns have to be charged three times a day on average and such vendors do make a reasonably good living out of this vending. 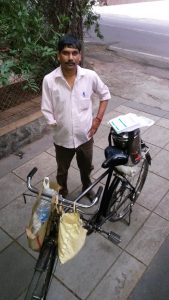 I had wanted to talk to this particular vendor because it was only a few days ago that I was able to see that he was conducting his entire business using only one hand and using the other only partly because the latter had been cut off below the elbow. Just imagine this spirited soul riding a bicycle with such a load, and dispensing tea one handed and collecting money etc all despite his handicap. I spent quite some time with him and found that he is an immigrant to our city from one of the most backward parts of India and there were others of his ilk in the same business here. He has his wife brewing the tea apart from her other household chores and from the earnings, he is putting his two daughters and a son through an English medium school education.

I salute this man and his fellow tea suppliers who are what C K Prahalad called Bottom Of The Pyramid Entrepreneurs. Unfortunately, such businesses do not feature in our GDP!