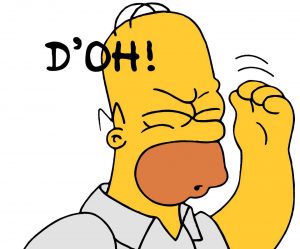 Even today, after 52 years, the scene makes me shudder and my reaction is exactly like Homer’s here.

The mistake was in getting into a relationship with a volatile lady.

The consequences were what made that the biggest mistake in my life.

I have briefly mentioned it in my post on Ambition, but let me give some details.

The relationship was rocky for many reasons but primarily because of a very possessive nature of the lady concerned. When the inevitable end to the relationship came, she got me imprisoned by her family with plans to get the two of us married the next day. Quite how I got out of that particular situation is material for another post at some future date.

The scene then shifted to where I was living then. My brother Arvind and I were staying with a couple who were very close friends of our parents. We had known them from our childhood and had spent much time with them in our childhood as they were childless and we were much liked by them.  The gentleman was a Senior Police Officer and was staying in a semi gated community of quarters for serving Police Officers. We were on the upper floor of a two storied building of two flats.

Two days after I was able to get away from the mess, the lady and her sister landed up downstairs in the open quadrangle below the flat and let off a tirade against me, my brother and our hosts. The language, to say the least, was anything but parliamentary, and something that that particular society had not expected to hear within their semi gated community. The decibels were loud enough to wake up the entire colony on that early morning.

After about ten minutes of that harangue they left threatening me with dire consequences. The damage however, was done.

Naturally, Arvind and I had to vacate those very comfortable digs and move to a hostel of sorts some distance away from the scene of action. Subsequently, I thought it prudent to leave the city for a while and you can read about it the post for which I have given the link above.

The negative consequences were:

No amount of apologies to my hosts were of use as, a highly respected officer suffered quite a bit of humiliation because of my mistake. On all my subsequent visits to him till his death a couple of decades ago, he would remember that instance and gently chide me for the trouble caused.

Arvind had to give up that nice comfortable accommodation and move to a much less desirable one.

I had to wind up a comfortable existence and move out of the city.

The positive consequence was:

I went to Business School and that made me what I am today. I doubt very much that without that qualification, I would have achieved some of the successes that I did in my life.