The Jack in the jack fruit is derived from the Malayalam word Chakka for it. It is one of my all time favourites and I gorge on it whenever it is available. I love to eat the fruit as well its seed after boiling and removing the hard cover from the seed. One of the reasons that we don’t get much of it in many homes is the mess one makes while removing the outer cover to get at the wedges.

During the lockdown, our help were not coming to work and I thought that I would at least get the seeds from a dear friends and ex colleagues from Kerala who has a few trees growing in his garden in Kerala. While they were ready and only too willing to oblige, the courier companies and the post office unfortunately were not willing to accept packages for destinations in our state. So, I had to inform them that I shall bug them next year by which time hopefully the lockdown would have been removed everywhere.

I still craved for the seeds in particular and I think that this is where the Law Of Attraction kicked in. My daughter in love’s mother had procured two fruits and today, one of them was cut open by one of the maids who has been allowed to come to work. The surprise was that the fruit was from a tree in the garden of my daughter in love’s maternal home in Pune. I got my wish fulfilled and these seeds shown here are about to be boiled and covers removed so that I can have my favourite snack. 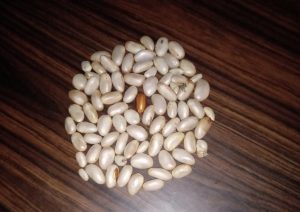