My friend Rajinder posted this image on my WhatsApp page. Below the image he had written in Hindi a statement translated into English – “This is how young boys grow up to become engineers.”

I couldn’t resist the temptation to post a response and posted this image. At the bottom, I added in Hindi the message – “This is how young boys grow up to be Captains of ships.”

A little background. Rajinder and I go back to the eighties of the last century when we were both colleagues selling to gullible customers in our Himalayan Region. We made one memorable trip together there and I had met him during many other occasions at our offices. He decided that being a salesman was not what he wanted to do and so went to sea.  We lost track of each other all these years, but thanks to modern social media reestablished contact recently. 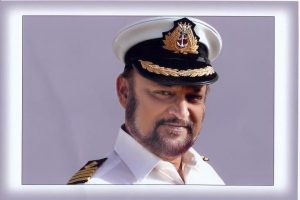 Rajinder eventually retired as a Merchant Marine Captain a few years ago. A remarkable achievement for a landlubber from the interiors of our vast country and particularly from the hills!

Rajinder reestablished contact with me on Face Book some time ago  and we have been in regular touch since then exchanging messages mostly on WhatsApp or over the telephone.  Apart from this interesting background, he is also a poet of Hindi verse and posts many couplets on Face Book.

Post retirement, he has settled down in Jaipur, a town that is 700 Kms from the nearest Port!  Like me, he too spends a lot of time in his garden and with his dog.

He has promised to make a trip to Pune to meet me personally and I eagerly look forward to it.

Thanks to Ranjan offering to stay at home and encouraging me to go out for a well deserved break, I went to see The Best Marigold Hotel, earlier this afternoon.

I thoroughly enjoyed the outing and the cinema was better than my expectations. British acting at its best, with good performances by the supporting Indian cast, fantastic camera work, and nostalgia generating photography of Jaipur and Rajasthan. A passable story line brought to life by some very good direction and excellent editing.

I must also thank my regular commentator Tammy who inspired me to go and see it.

Welcome to the Friday Loose Bloggers Consortium where twelve of us write on the same topic. Today’s topic has been chosen by Paul of Black Water Town. The ten other bloggers who write regularly are, in alphabetical order, Delirious, gaelikaa, Grannymar, Magpie, Maria SF, ocdwriter, Padmum, Paul, Rohit, The Old Fossil and Will. Do drop in on their blogs and see what their take is on this week’s topic. Since some of them may post late, do give some allowance for that too!

Unfortunately, I have no personal experience of getting lost. Neither in the personal context or in the poetic context of getting lost in someone’s eyes or love or whatever sentimental balderdash. Nor being told to do so by a spouse or a boss.

I do however have three significant incidents of other cherished people in my life getting lost, and eventually finding their way back. I share those three instances with my readers.

The first episode was courtesy Ranjan who was all of 7. The action was in Mumbai then known as Bombay. One day I was in my office when Urmeela rang me up to say that Ranjan had not reached his school in the morning and was not seen boarding the school bus. I rushed to the school, spoke to the teachers, the bus driver and Ranjan’s classmates who also used the school bus, and all of them said that Ranjan simply did not board the bus. Mani, Ranjan’s nanny had last seen him waiting with the other children for the school in the morning and since it was a daily routine, had left him and gone off to the grocer to get some stuff for the home. I rushed home from the school and went to all the shops near our home, the lending library from where Ranjan used to borrow comics, the doctor’s clinic etc but could find no sign of him anywhere. In the meanwhile, four hours had passed and I was about to go to the area’s police station to lodge a missing person report when the door bell rang and Ranjan was at the door. He had not felt like going to school that day for whatever reason, and had quietly slipped away to the terrace of the building where we lived and from where I used to fly kites for Ranjan. He simply loitered there and fell asleep and when he had had enough of that experience, came down. In the meanwhile, I had to calm myself down and also manage the two hysterical women dreaming up all kinds of dire possibilities.

The next time the action shifts to Delhi where we lived in 1981. We had driven down to Jaipur on holiday. My mother, Urmeela, Ranjan, Mani, and our driver Bikram Singh made up our group. We were in Jaipur for three days of sight seeing and had a grand time visiting all the places of importance and on the third day, checked out of the hotel in the morning after breakfast. Before starting the drive back to Delhi, Urmeela and my mother wanted to do buy some local handicrafts and so we went to the emporium located on one of Jaipur’s busiest roads. All of us got down from the car, and I was giving instructions and money to Bikram to fill petrol and followed the family into the emporium. Inside, I found the three ladies engrossed in their shopping, but no sign of Ranjan. I asked Mani where he was and she went ballistic not finding him close to her. My mother had a fit and Urmeela almost fainted. We came out of the emporium and searched in the vicinity with no success whatsoever.

The search took about half an hour and while I was frantically asking various people if they had seen a little boy of 10 lost, when one seedy looking character asked me what I was searching for. When I told him that I was looking for my son, he asked me for a description which I gave and satisfied he said in ominous tones that the boy was safe and in his Saheb’s custody and that I should accompany him to meet his Saheb. Alarm bells were ringing in my head, imagining all kinds of possibilities of kidnapping for ransom etc, but having no choice in the matter, left the ladies at the emporium to await my return and took the seedy looking man along with me in the car to meet his Saheb. I was taken about three kilometers to a decrepit old building in the commercial part of Jaipur and led up two flights of stairs to a spacious hall where behind a massive table sat one mousy looking man and before him on the other side of the table sat Ranjan blissfully having a cone of icecream. Taking stock of the situation, I thought that I should be able to handle the two characters with the help of Bikram who would shortly arrive after parking the car. The mousy man came around the table with an extended hand and asked if I was Ranjan’s father when Ranjan turned around and greeted me with aplomb. It turned out that the mousy man was a gentleman after all and found Ranjan lost and crying near a bus stop and took him along to his office and had sent his peon to look out for anyone searching for a little boy. In the meanwhile, learning the name of the hotel where we had stayed from Ranjan, he had contacted them only to be told that we had checked out. Having learnt my employers name in Delhi from Ranjan, he was in the process of finding out the phone numbers to book a trunk call when I landed up. With great relief he handed over Ranjan’s custody back to me and refused to accept any kind of compensation for the expenditure incurred by him in the matter.

In the meanwhile, the ladies were having their bit of anxiety and recriminations at the emporium. We did not have mobile phones those days, and they had to stew for some couple of hours before I returned with Ranjan, and we left on our way back to Delhi. Ranjan had just slipped out of sight to watch some street jugglers while the ladies were negotiating the entrance to the emporium and did not see him slip off. Mani never stopped hearing about this episode till she left us in 1984 after having been with us for ten years.

The third episode had Urmeela as the actor. It was in 2002 when we were living in Tirupur with Ranjan and his wife Leena safely minding store in Pune. Urmeela’s dementia had already begun to manifest in small ways but nothing troubling had been experienced by us till then. One evening, while I was in the office, Urmeela decided to go for a walk alone, which she had never done before. Having gone some distance, she lost her sense of direction and could not find her way back home.
She could not speak the local language Thamizh. It was extremely rare that one could find someone capable of speaking English or Hindi in Tirupur. She was wandering around lost and in a panic, when by our good fortune, one of my colleagues saw her and stopped to greet her and pay his respects. That saved the situation and she was escorted back to our home and I was summoned by phone to take charge. It was one of the defining moments in my life for me and the next morning, I spoke to the Chairman of the company where I was employed that I would like to wind up my stay there and wished to speed up the project that I was working on. He readily agreed, made the resources available and I wound up our home there and we returned to Pune after about a month.

I would not like to have such experiences ever again.