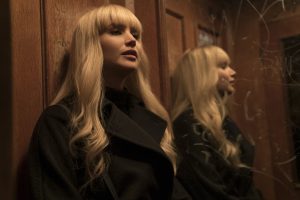 My son Ranjan had seen Red Sparrow earlier this week and was insistent that I see it. I tried to on a few occasions earlier in the week but, was unable to due to unavoidable reasons. I was able to catch a matinee show earlier this afternoon and I understand why Ranjan wanted me to see it.

Jennifer Lawrence as a Red Sparrow is simply magnificent and the story, direction, photography and action kept the audience spell bound for the entire running time of 2 hours and 20 minutes. Some very tight editing ensured that the pace was maintained and all in all a remarkably well made film. The story is built almost entirely around the lead character and so the others make more or less cameo roles in it.

The spy story is unusual and the climaxing turns and twists makes for top notch thrill.

If you are interested in spy stories particularly about women being trained to be honey traps, don’t miss this. I guarantee that you will thank me for this recommendation.