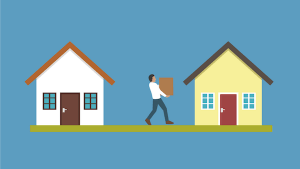 My fellow 2 on 1 Friday blogger Shackman has recently relocated to California and I was inspired to suggest this topic by that move. Please go over to Shackman’s blog to see how he tackles the topic.

My pre-marriage and the first year after that was life living out of a suitcase from the age of 16 for me. I had relocated a few times between Hyderabd and Chennai/Mumbai and also Ahmedabad before my marriage in November 1968. Relocating was simply a matter of packing my suitcase and moving to a hotel, hostel or paying guest accommodation and did not make for much effort or difficulty.

The first home we set up after marriage was in Delhi and since it was for a stay of just a few months, we had taken a barsati on rent and hired furniture and bare minimum utensils and a stove but both of us lived off suitcases.

The first proper home that we lived in was in Mumbai between 1970 and mid 1973 when we acquired furniture, cooking utensils, linen, etc and when we had to move to Kolkata, we were exposed for the first time to relocating with major packing, discarding etc but, the redeeming feature of the exercise was that we could hire professional packers and movers who did the dirty work, stored the stuff till we found accommodation at Kolkata and unpacked for us too.

From that first move, we relocated to Kerala, back to Mumbai on three occasions, Delhi and Bengaluru and finally to Pune in 1990 where we bought our home where I continue to live till date. During these relocations we moved and set up new homes on eight separate occasions till we put in our final roots.

I had to relocate on two separate occasions afterwards to Tirupur but since it was to furnished accommodation on both occasions I simply had to pack a suitcase. Whenever Urmeela came to stay with me there, she too simply had to come with a packed suitcase. So those two relocations were not really relocations in the true sense.

The only major disruption that we experienced during the relocations was in the schooling of our son Ranjan which, we once even had to solve by admitting him to a boarding school for three years. In retrospect, those three years were also the most disturbing for both of us despite frequent meetings with him at his school as well as his coming home for his vacations. Another experience that I would not wish on anyone.

I can therefore confidently assert that I am a seasoned and well-experienced relocator. I would not like to do that again though as I am now too well ensconced in my comfort zone in Pune where it will be three decades next year, since we relocated.

In my extended family of siblings and cousins both maternal and paternal, I am one of the rare ones who lives with his offspring. Something that was unthinkable during my parents’s time and well into my adulthood as well. Both my parents stayed with their children during their retirement stage and died while resident with one of the children. Today, if I look at my immediate family, none of my nephews and nieces stay with parents and the parents one of whom is single, live separately.

While this is increasingly getting to be the norm here, there are constant messages on WhatsApp and facebook about the necessity for the grown up children to spend time with their parents. This is one such video showing an adult male going to visit his widowed mother. The language is Malayalam, spoken in our Southern state of Kerala. There are no subtitles but, the story line is easy to follow despite that. Pulls all the right strings! I regret that I am unable to give credit to the maker/s of the film as I am unable to find details.