I wrote in my post on nostalgia about my very first wrist watch which was a Titoni. India those days was a Socialist country and wrist watches were considered to be luxury items which were not necessary for Indians. People who had them were considered to be very fortunate and so when I inherited that watch I became one too. Times are vastly different now with two very large wrist watch manufacturers in India making world class watches and plenty of imported high end watches also available at fancy prices. We also have plenty of cheap digital watches in the market mostly from China. Younger people find it difficult to believe that the simple wrist watch was once a status symbol for my generation.

I wore that Titoni from 1963 till 1982 when I received a Long Service Award in the form of a wrist watch for 15 years of service from my employer. According to the policy the company would only pay a certain sum for the watch and if an employee wanted something more expensive, he had to make good the difference and that is what I did to get what was considered to be a luxury item then, an Indian made HMT watch with an automatic winder which kept winding up as one simply wore it on one’s wrist, eliminating the need for winding the watch every morning. A colleague who always had an eye on my Titoni asked for it and I happily gave it away to him. 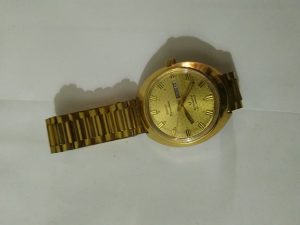 I wore this HMT watch for over twenty years.  It is still in excellent condition and kept inside my cupboard for sentimental reasons.

A well wisher seeing the antiquated watch that I was wearing in 2002 decided that I needed an upgrade and gifted me with this Maxima watch which is what I now wear whenever I go out. 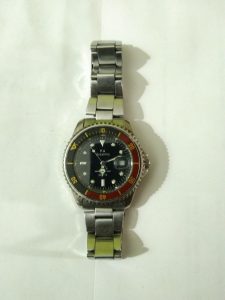 It is a battery operated one and needs the battery to be replaced whenever it runs down which is a simple matter with many shops all over the city only too willing to replace it for a small consideration.

A few years ago my brother Barath bought a wrist watch for me from the UK when he came on a visit.  Last year, a visiting friend sans a wrist watch wanted to know where he could buy one nearby. I simply gifted that watch away to him on the spot much to his surprise and delight.

A few months ago, I won a prize as part of a promotional programme by an online shopping site and this is what I got. 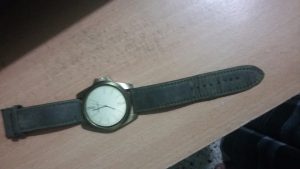 This too is a battery operated one and I wear it occasionally just to keep it in use. I suppose that one of these days, some other lucky visitor may get it as a gift too!

So, bar the small difference in price that I bore between what my employer paid and the ticket price, for the Long Service Award watch, I have not every paid for and bought a wrist watch ever in my life. How do you like that?

Many young people now think that wearing a wrist watch is passe and depend on their cell phones to find out what time it is whenever they want to. I find it easier to look at my wrist watch.