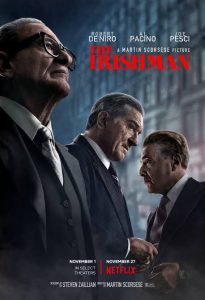 My readers have perhaps noticed that I have stopped reviewing movies. I stopped going to movies because of the need to walk long distances in the malls where the multiplexes were located and my COPD came in the way of doing that comfortably. Somehow, despite Netflix, Amazon Prime and what else have you, having been installed at home by the younger generation, I never got around to watch any except the rare one which I happened to see if they were watching earlier than their normal time in the late nights.

I however sat up late last night for three and a half hours and watched The Irishman as, I just could not resist the temptation of seeing De Niro, Pacino and Pesci in a Martin Scorsese directed film. Thanks to its being available in Netflix I did this much to my satisfaction.

For those of my vintage, this is a must see film. The characterisation, cinematography and direction with period details are simply magnificent. I intend seeing it again after some time to catch up on some dialogues that I think I did not quite catch due to poor reception.