Pleases click on the image to get a larger resolution. 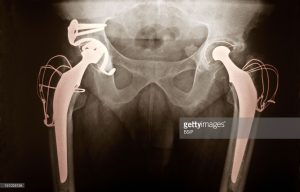 That X-ray shows both hip joints replaced with prostheses. Both my hip joints have been replaced and having worn out, one has been revised twice and the other once. The latter is due for revision but, I am postponing as much as possible to avoid getting on to a surgical table again.

A colleague and friend who had not seen me for some time, saw me walking with a cane while I was still in my late thirties.  He simply would not accept the medical reasons for my problem and thus an urban legend was born.

The story spread like wild fire among my friends and colleagues and is now the most accepted part of the legend that is me.

I was supposed to have jumped out of a second floor flat and hurt my hips. When asked why I had to do that, the answer was that the husband came.

Shackman has suggested this week’s topic. You can see what the other writers of the LBC have to say in their respective blogs.  Maria, Pravin, Ashok and Shackman<