My daughter in love and my son, my one and only child are both deeply involved in Animal Welfare activities and have many like minded people come home for meetings and letting off steam. At times, the conversation tends to focus on adoptions of abandoned dogs and I inevitably quip to the person addressing the issue that I too am up for adoption as I do not see my DIL and / or Son much due to their very busy lives.

So, when DIL changed her DP on her WhatsApp page, I copy pasted the same on to a family group with the question, “Guess who stole my DP?” I posted this on my Facebook page too and before too long, another member of my family, my one and only sister posted this in response. 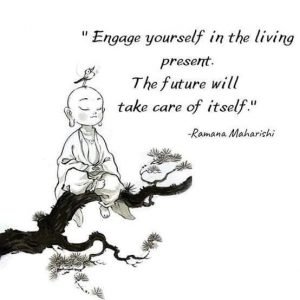 You can see the play on the name of the author of that quote!

My earnest request to those who visit Facebook is to see the posts to see the comments there which took me to a different dimension of life.

And if you want to see how truly funny we are, you must visit this post and read all the comments there too. This is the Advaita approach to the “other”. I am named after this sage and had been taken to him as an infant to get his blessings.

The oneness of existence is the core of the Indian philosophy.

Unfortunately, human beings have gone astray in their thinking and we have landed up in the Tragedy Of The Commons.

I have no solutions to the problem and if and when I am asked, I refer them to Advaita philosophy.

This is my take on this week’s Friday 5 On 1 blog post topic. The other four bloggers who write on the same topic every Friday are Sanjana, Padmum and Shackman and Conrad.  This week’s topic was suggested by Conrad. Please do go over to their respective blogs to see what they have to say on the topic. Thank you.

My usual meditation session this morning was not the kind that I experience every day. I had a monkey mind working overtime and it took a great deal of effort to stay on course.

This is to be expected and not the first time that I have experienced such a disturbed session. What came as a surprise to me was when I opened my mail box this morning, I had received a forward from another meditator friend Ramesh. He sent it because it referred to a message from a highly revered sage after who I am named, Ramana Maharishi.

I reproduce the email message here for the benefit of my friends who meditate. In the evening a visitor asked Maharishi how to control the wandering mind. HE began by saying that it was a question which particularly troubled him.

Sri Ramana Maharishi replied laughing: ‘That is nothing particular to you. That is what everybody asks and what is dealt with by all the scriptures, such as the Gita. What other way is there except to draw the mind back every time it strays or turns outwards, as advised in the Gita? Of course it is not an easy thing to do. It will come only with practice.’

The visitor said that the mind strays after what it desires and won’t stay fixed on the object we set before it.

M: “Everybody seeks only what brings him happiness. Your mind wanders out after some object or other because you think that happiness comes from it, but find out where all happiness comes from, including that which you regard as coming from sense objects. You will find that it all comes from the Self alone, and then you will be able to abide in the Self.