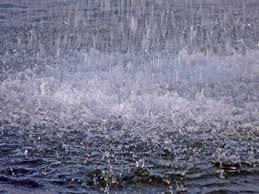 After a dry spell of three days, the monsoon revived again this afternoon and I got up from my siesta to petrichor. Sitting in our verandah and watching the rain fall in our garden is one of my favourite pastimes and I indulged in it till the showers lasted.

Last year I was in better physical condition than I am now in and I was able to make short visits outside our home and I had gone to a reunion of ex colleagues at Lonavala during the rains. Till a few years earlier, every monsoon I used to go to Mahabaleshwar at least once during each monsoon but, all those are now distant memories.

I am at least mobile enough inside the home to be able to enjoy such a small pleasure that I am grateful enough to appreciate such small pleasures like petrichor and rain watching.

I am also very grateful that I am blessed with two young people in my life who pamper me.  My pedicurist is closed due to the lockdown and since I cannot bend down to clip my own toe nails, my son Ranjan obliged. AND my daughter in love sneaked up from behind me and took this photograph to save the moment for posterity. Thanks to the great efforts taken by a friend who was my colleague in a company in which I was employed 25 years ago, I attended a reunion yesterday of some more colleagues from the late sixties and seventies of the last century. The reunion was arranged in Mumbai where seven of the attendees now reside with my friend coming from Bengaluru and I going from Pune to make it a nice nine attendees.

The venue was a restaurant attached to a Gymkhana in the Eastern part of Mumbai and for me to enter that suburb and exit was not difficult as traffic on Sunday was light. When all of had assembled, I was the second last to land up, there was a lot of hugging and shouting at each other and the management of the restaurant seeing the rowdy behaviour of such old codgers decided to give us a basement room exclusively for our use and made two waiters wait exclusively at our table.

All of us are over sixty and two are still employed and one is running his own business in a town some distance away from Mumbai. Bar me, all are grand parents and five of them had children overseas.  Like the cartoon above, all of us kidded each other about our appearances.  I was meeting all of them except one after 25 years.  The one exception keeps coming to Pune and has been in touch regularly even otherwise.

Except for the friend from Bengaluru and the businessman, the seven others were all colleagues who had worked together with me in Mumbai and one had worked with me in Kerala too. We were all salesmen who grew within the company into managerial roles and had a lot of old stories to remember and reminisce about. We caught up with who is where, who died, whose health is bad and so on and bringing the reunion to a close was extremely difficult.

We have now decided that this group, plus a few who did not come due to various reasons, will meet regularly at Mumbai and Pune and keep in touch. What a day! This morning, I got a phone call from my sister who is visiting her son in Bengaluru who suddenly put me on to speak to another lady on the phone who turned out to be a childhood friend from Chennai from the early fifties of the last century, now settled in Bengaluru and there was so much to talk about our respective mothers who were the greatest of friends and the rest of the family. Another great nostalgia trip that too culminated in promises to keep in touch and meet at Bengaluru and Pune.

My friend Anita sent me this message and the link to the video advertising a product that you will recognise soon enough.

“I have older  friends who have been victims of the India-Pakistan Partition, and many times, have been transported by their stories of the difficult times they went through.

This is one of the best videos that I’ve seen in a while, and it touched me deeply. Not only is it beautifully made to showcase the product without throwing it in your face, but it also runs like a short film, with subtle performances capturing emotion without turning maudlin.”


The story is of a Hindu who left Lahore and came to Delhi sharing his memories of childhood friend Yusuf whose family ran a sweetmeat shop from where the two young boys used to steal jajariya, a sweetmeat. The grand daughter decides to surprise her grandfather with an unusual birthday gift.