This article in the Guardian, naturally took me back to early 1981 when I had to start using a walking stick to navigate my way around due to both my hip joints giving me trouble.

For the past 36 years plus now, I have been using a walking stick whenever I leave home, even if it is just to our grocer across the road. I simply cannot imagine my being able to be without one outside my home.

Here is a collection of walking sticks that wait for me just near the main door to the house. 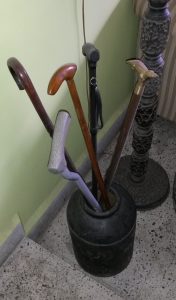 I pick one as I leave and choose the one most appropriate for the trip I am making. For instance, if it is to the local park, I will choose the black one with the strap, or the brown one with the brass handle if I am going for a formal meeting.

I have a few more stored away in the attic, notably a pair of elbow crutches which I have to use immediately after surgery for revision to the replaced hip joints.

There is a story behind the brass handled walking stick. A friend winding up his longish stay and returning from the UK to India, bought it as a gift for me in London. On his presenting it to me, I discovered that it was made in India, by the engraving at the bottom of the crocodile shaped handle! It went all the way to London and came back to me in Pune! You can imagine the embarrassment that it caused my friend.

One of the advantages of being with a walking stick is the readiness with which people help with seats, places in queues etc. It is also a nice way to identify myself to strangers to look out for a grey bearded old man with a walking stick. It never fails! The Guardian has an article about some things to do in 2015 among which this paragraph has caused a bit of a dilemma for me!  Please click on the image for a larger resolution. There is an interesting description there about being a “lumbersexual”, which intrigues me more. I don’t work at Nerdery, nor am a barhopper. But I do wear checked shirts and keep a beard. I don’t look anything like the models featured in the article, but if push came to shove I can work a Mac as well as a Nerd though I don’t carry in in a backpack. I drink one mug of coffee a day and two mugs of tea, so I can pass for the requirement in that department. The dilemma is in taking off the beard. So, this is a poll. Should I keep or not keep my beard in 2015? At the end of the poll, I am unlikely to take off the beard because I am just too lazy to shave everyday, but the poll should be interesting! 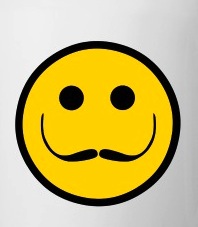 I was under the impression that Indian cities were the worst in the world for women due to sexual harassment that they face. Here is a sobering thought about the situtation. It is also another fact that among all the cities in India, Delhi is the worst with one in four registered complaints coming from that city, our capital.

So, this article in the Guardian came as a complete surprise to me. My memory of the London of my visits had not prepared me for this shocking news.

Our two capitals seem to compete with each other for the fist place.

What is it that drives these men to such despicable acts? The most reasonable answer that I have received is that they are frustrated in their personal lives and take it out on women who are perceived to be easy targets and fair game. I suspect that there is more. In the case of India, single men migrate to cities to seek some kind of employment not available to them in their native towns or villages and are subject to loneliness, and also the very suggestive Indian films and television programs that make it appear as though securing the attention of women is very easy.

Whatever the reason, quite why this should happen in London is beyond my understanding. END_OF_DOCUMENT_TOKEN_TO_BE_REPLACED