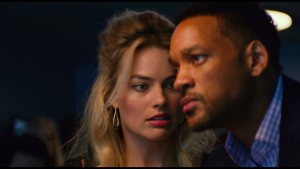 I had been looking forward to the release of this picture ever since it was announced in our papers because Will Smith is in it.  And when I found that Margot Robbie was also in it, I was caught hook line and sinker.  I had seen her in The Wolf Of Wall Street and had enjoyed her role and she did not disappoint me in this either.

The story is incredible in a peculiar sort of way but what makes it work is the direction and tight editing of some remarkable acting by the entire cast. The twists and turns that the story takes keeps you glued to the seat. Throw in some great background musice, a lot of it jazz, and that it is all delivered nicely in just over a hundred minutes makes it a worthwhile afternoon spent at the movies and subsequently at the food court for some delicious Delhi Papri Chaat and tea in great company.

I have no problem giving it a [rating=5] rating with a recommendation to my readers to see it if you wish to see some nice gentle humourous entertainment.