The idea for this title for our weekly 2 on 1 Friday post where Shackman and I write on the same subject came to me when I received the following piece of humour from a friend:

Today is ‘World Marriage Day.Let us keep 2 minutes’ silence and read some quotes of fellow – sufferers.

After marriage, husband and wife become two sides of a coin, they just can’t face each other, but still they stay together.
– Al Gore

Women inspire us to great things, and prevent us from achieving them.
– Mike Tyson

I had some words with my wife, and she had some paragraphs with me.
– Bill Clinton

“There’s a way of transferring funds that is even faster than electronic banking. It’s called marriage.”
– Michael Jordan

When you are in love,
Wonders happen.
But once you get married,
You wonder, what happened.

I was a married man for forty years and never once had to crack a joke on the institution. My late wife used to say that it was because I was hardly at home due to the travelling nature of my job and so, whenever I was at home, I just enjoyed the comforts and security of home and was not exposed to the other realities that other stay at home husbands did. By the time I retired or chose to retire due to her illness, the nature of the relationship changed and there was no scope for humour.

We got married according to Vedic rites the most important parts of which are the seven circumambulations that the couple take around a sacred fire. 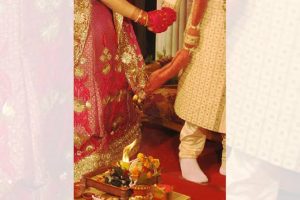 After that ritual, this is the shloka from Vivaha Karmakandaa that every bridegroom is made to recite after taking the seven steps holding the hand of the bride around the fire. I too did.

How beautiful! We did indeed follow each other for as long as her health lasted. When it failed, we got joined at the hips as it were and that lasted for another eight years till death did part us.

Like all relationships, we had our ups and downs but, mostly it was all ups. There was rare chemistry between us which I think was due to our having been friends for eight years before we decided to get married. I can honestly say that it was a successful marriage.

I despair at the frequency with which modern marriages break down but I understand that the world has changed and different value systems and pressures operate now than those that prevailed in our youth and middle ages.

Please do go over to Shackman’s blog to see what he has to say on the subject.