In my last post “It Pours” I had mentioned getting a console made for our inverter. Some of my readers have expressed their desire to know something about inverters.

The Wikipedia has this to say about inverters which may confuse my readers more!

Simply stated, an inverter that I talk about is an electronic gadget, connected to a storage battery and to the electric supply system of a home; which keeps power supply going on when there is a power outage. In India, such outages are quite common and therefore many homes have such an arrangement so that they do not have to suffer outages too much. The storage battery simply needs its distilled water topped up every two months or so. 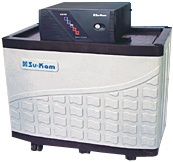 This photograph shows the inverter sitting on top of a console within which the storage battery is located.

I changed the console from a plastic one like the one above to a sturdier wooden one on stronger castor wheels.

As is to be expected Lin has once again come up with a topic for which I had to do some research. I had never heard this phrase before. Thankfully the research did not take too long and I found exactly what I was looking for in Wikipedia. Since Wikipedia is quite clear in its explanations, I simply copy paste their version and leave my comments to another aspect of entertainment later in this LBC post.

“A progressive dinner (US) or safari supper (UK) is a dinner party with successive courses prepared and eaten at the residences of different hosts. Usually this involves the consumption of one course at each location. Involving travel, it is a variant on a potluck dinner and is sometimes known as a round-robin. An alternative is to have each course at a different dining area within a single large establishment. In a safari supper, the destination of the next course is generally unknown by the participants, and they have to decipher a clue before moving on. In the USA, participants go to each house for the various courses. Often there is a regional theme for each dinner, such as Italian, German, or French. Various wines to suit the courses are often served at each location. A challenge is keeping the food warm and ready at each location. An alternative is to have the courses at different restaurants.
This style of eating has recently become popular as a charity fundraiser in rural Britain and is seen as a good way of meeting different neighbors in the community by virtue of each participant having separate guests.”
~ Wikipedia.

I have never been to a Progressive party and I am in no condition to experiment with one. I can safely leave that for younger people. In my time, something similar to progressive dinner would have been what we called pub crawling which on occasion turned into home bar crawling after the pubs had closed down. We would go from one home with some stock of booze to another till we had had our fill. I haven’t done that either in decades and do not visualize doing that ever again.

Anyway, thanks Lin for introducing me to another very interesting concept in entertainment. I suspect that we will find out from Lin that she has some form of synesthesia about which she would like to write for the Loose Bloggers Consortium weekly posts. Otherwise, for the first time ever since the LBC began I am stumped good and proper with my bat well above the crease and back foot well out of the crease. I did not know that such a word or phenomenon existed and since I do not have any symptoms of it personally or know anyone with it, was blissfully ignorant.

I can of course be facetious and say that I am a perfectly normal male who will respond to all kinds of stimulation, but I somehow feel that such reaction is not quite what Synesthesia is. My attempts at learning about it in the Wikipedia has confused me even more! I think that I will simply leave my readers with the message that I am sorry that I am unable to come up to my usual standards in this post and leave them to find out more about the topic from the other LBC bloggers and Wikipedia but particularly from Lin. “Seriously: What do you suggest? Unless you are willing to hand me the scepter. Then we’ll have paradise on earth. I will rule the world and we’ll all live happily ever after: Snakes being turned away at the gate. Fancy being consort or at least adviser to Her Ruling Mighty Highness? I myself had worse job offers.”

I can’t resist the temptation to put this cartoon down here.

What do I suggest?  I wish that I had an answer to that, that would make sense in today’s world.  There is only one answer and that is to make democracy work as it is supposed to work.  Wikipedia does a reasonably good job of defining that;

“Democracy is a form of government in which all eligible citizens have an equal say in the decisions that affect their lives. Democracy allows eligible citizens to participate equally—either directly or through elected representatives—in the proposal, development, and creation of laws. It encompasses social, economic and cultural conditions that enable the free and equal practice of political self-determination.”