My irrepressible daughter in love procured from somewhere a new root vegetable which I had never seen or had before.

She informed me that it is a popular vegetable from Indore which by chance, she found in the market during her foray there and brought for us. It is called Garadu and is so rare that it does not feature in wikipedia or any other source to enable me to give a link to it.

It is essentially a member of the yam family.

I had it roasted and we had it earlier today for lunch. 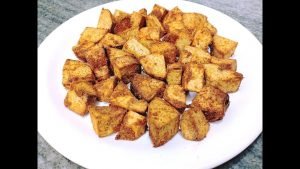 Needless to say, I over-ate taking the chance of some suffering later in the day but, as I write this, no ill effect has occurred.

I could not resist the temptation to share the news of my lunch with some friends from Indore and they were all surprised that it was available in Pune where we live and complimented me for having had the good taste to have it.  Having tasted it once, I look forward to having it more during the next season which I am told is normally between October and March.  Perhaps what we procured was from a cold storage facility.