A friend of mine had posted this on his Facebook page. I was fascinated with this observation for its depth and truth but also its appeal at the superficial level. I decided to change it to reflect  the physical aspect and came up with this one. 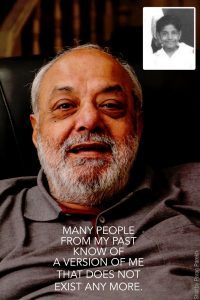 I wanted to insert an older photograph of mine but, I was too lazy to go to my collection of hard copies and spend time looking for one. Facebook came to my rescue and gave me this photograph with my siblings and two cousins which my sister had posted some years ago. Rear row from the left, my late father, I, my late younger brother Arvind, my uncle’s driver Narayanaswamy;  front row from left, my younger brother Barath, my sister Padmini, cousin Gayathri and her elder brother Ramani.  Another important fellow, the brother between Gayathri and Ramani, Shankar, is missing as he was playing hard to get to pose for the photograph.  This was taken in one of the ubiquitous photographer’s studios that used to proliferate those days.

I took a cropped version of me alone, to show how I looked when I was about twelve, circa 1955.  The occasion, was a day’s outing to a temple outside Chennai, then known as Madras.

When I sent the middle image to my friends and family on WhatsApp I received some amazing responses about how either I have not changed at all (!!!) or, how I am still as handsome as I was then and so on!  Very flattering but, the point was totally missed!

The outer scores over the inner.