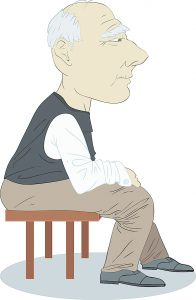 “The eternal problem of the human being is how to structure his waking hours. In this existential sense, the function of all social living is to lend mutual assistance to this project.”

A classmate of mine who was in his own business till age finally caught up with him handed over the business to his son and retired some six months ago. He however kept going to the office till his son finally told him to either stop or take the management back from him. He finally stopped going to work and came to find out from me how I manage to pass my time in retirement.

Yakob has been part of my family’s life since December 1990 when he came in as our gardener and handy man.   Yakob was working as a peon in an establishment near our home and his employment with us was for before office hours.

Yakob hit the age of sixty by the end of February this year and had to retire from his position from the establishment where he was working.  Since then, he has visibly deteriorated from a cheerful and happy go lucky fellow to a listless and cheerless individual.  No amount of my trying to cheer him up helps.

Both these cases are typical of many retired people who do not know what to do with themselves during their waking hours.

To the former, I explained how I occupy myself with so many things that I find little time to do other non routine things. He just could not understand how I could read so much, solve crossword puzzles, blog, WhatsApp and so on as he never had the time to develop such or other interests during his working days. He left as disheartened as he was when he came in.

To the latter, I am trying to find some re-employment through other friends and hope to find something soon.

Retirement can be brutal if one had not developed some interests other than career related ones while still working.